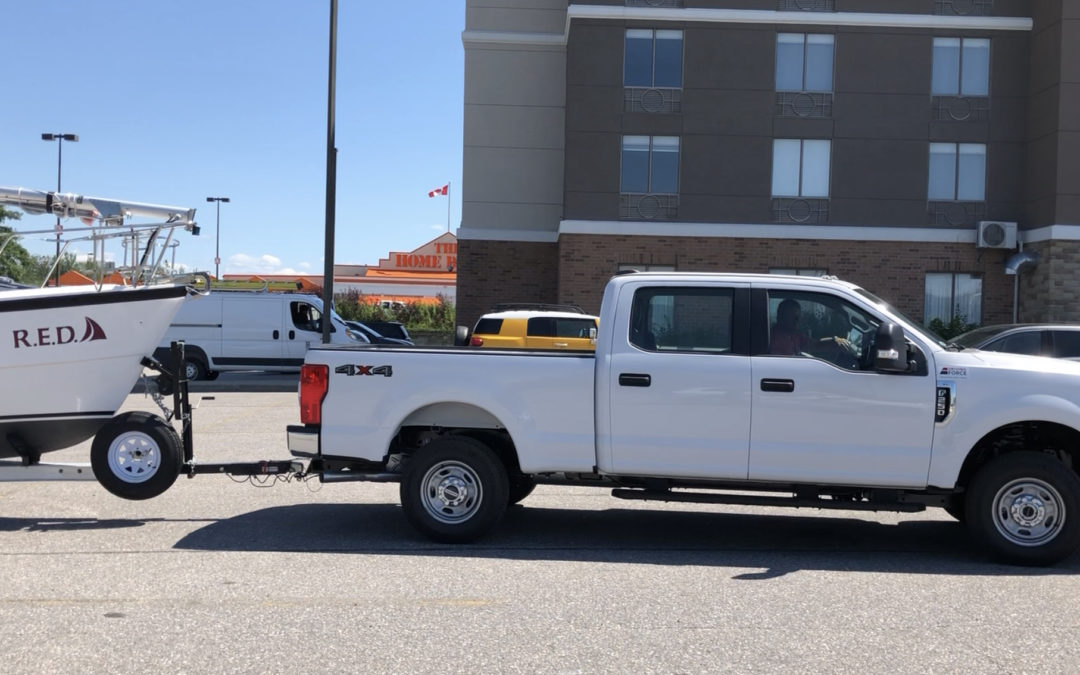 “We are like islands in the sea, separate on the surface but connected in the deep.” – William James

How he found us, we may never be entirely sure. A true mystery if there ever was one. Vibes in the universe? Some sort of transfer of energy? It’s just basic physics after all. I do ramble on don’t I?  All of this to say R.E.D. has a new home.

We splashed for the season. Decided to sell.  Posted sale notice. Received an email. I responded with our contact number. Within minutes the phone rang. ‘Hi this is Stanley’ …. Deal sealed in principle.  Our heads were spinning.

Never realizing what we had set in motion by advertising a 2013 MacGregor 26M for sale, we were overwhelmed with the interest. Yeah OK, R.E.D. is kind of famous….and pretty….pretty and famous. The blog has a very healthy following. We’re the Crazy Canucks after all. What about the time  anchored near Boldt Castle in New York during the fourth of July fireworks and someone yelled out “Hey there’s R.E.D.”? Or in Ramouski, Quebec when someone approached us saying they had read an article about us in The Port Hole? Or the most epic of all, that moment we were photographed in front of the statue of liberty, the only Canadian vessel, in a flotilla of 145 boats, with the great French ship Hermione? 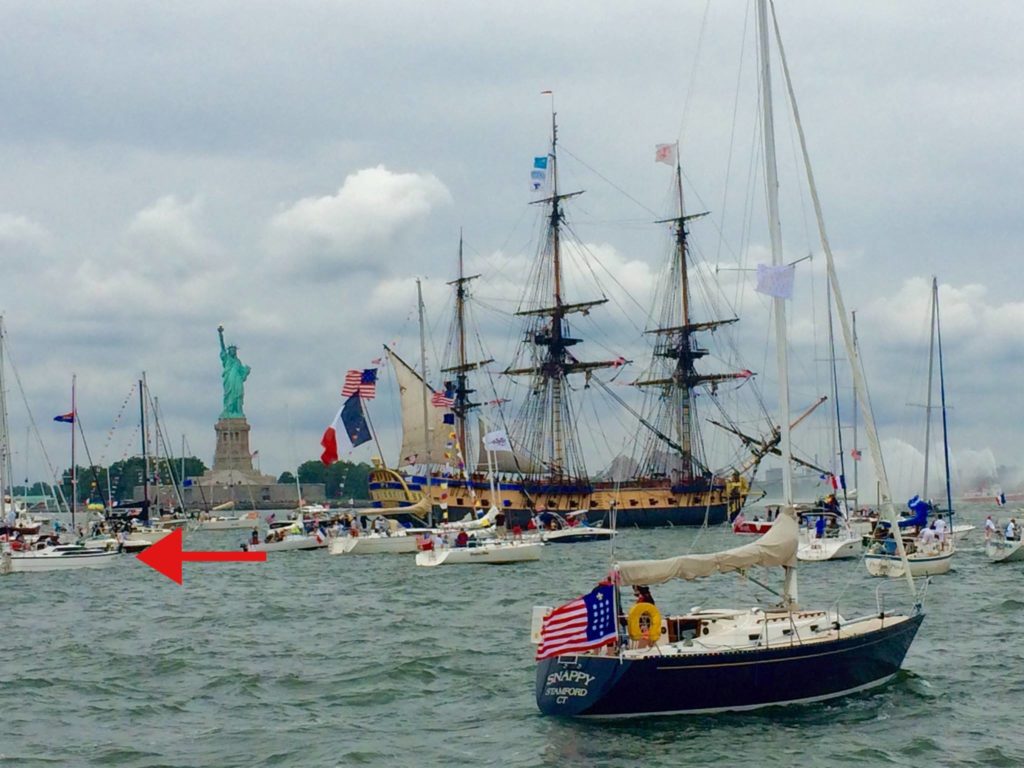 Aside from feeling out of breath, I no longer feel sadness. Belly butterflies, yes. Sadness, all gone. R.E.D. has found a new family. I think that really it was our hearts that chose them. And believe me, there were easier options. Two other serious buyers and local at that.

The change over was going to be anything but simple.  The buyer lives in the Yukon. You read that right. Way the heck on the other side of the country. Almost 7000 km away.  But where there’s a will, there’s a way.

First of all we needed to hatch a reasonable plan. Transport. And I felt we really nailed one that suits both parties.  We haven’t trailered R.E.D. a lot in our seven years other than bringing her home from Hamilton, Ontario to Montreal, Quebec. The second time was when we brought her from Montreal to Trois Rivière for our first summer adventure. The last time of any distance was when we moved from Montreal to Nova Scotia three years ago. But we were confident a good tow beast could handle it and that the trailer didn’t have any significant  mileage. We did however have the trailer inspected to make sure it could safely haul longer distances and it passed that first hurdle. 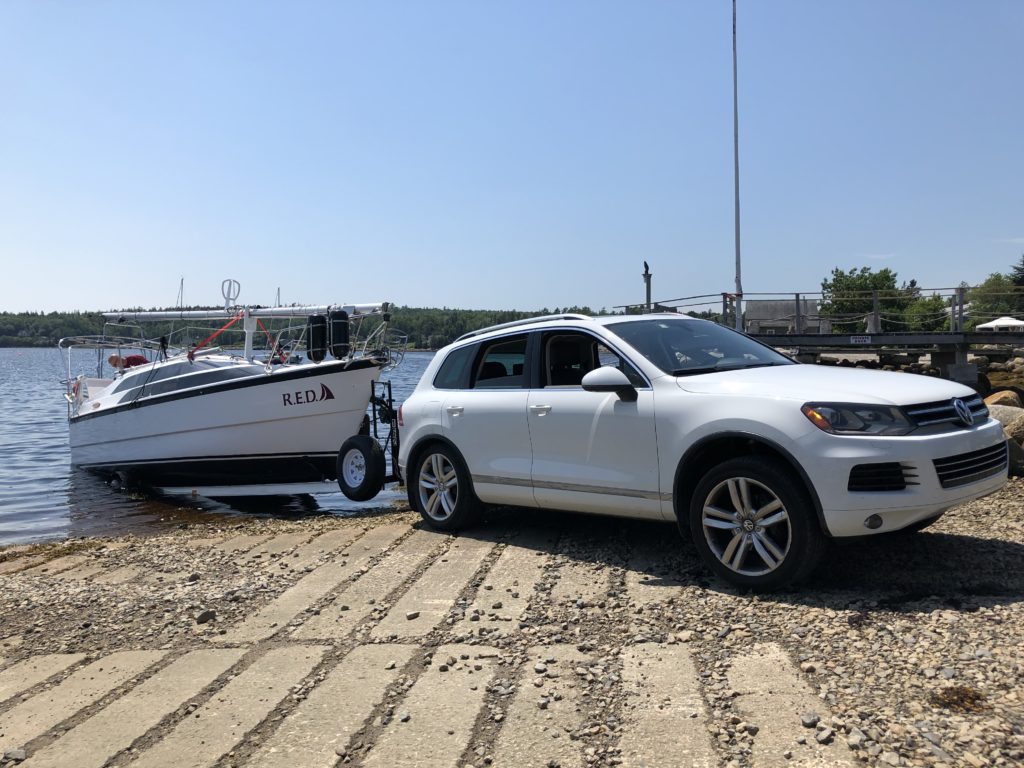 Secondly, we decided to offer to bring R.E.D. part way. We do love our road trips and it just felt like the right thing to do…at the very least. So, crossing four provinces, we agreed to meet in North Bay, Ontario for the final hand-over. 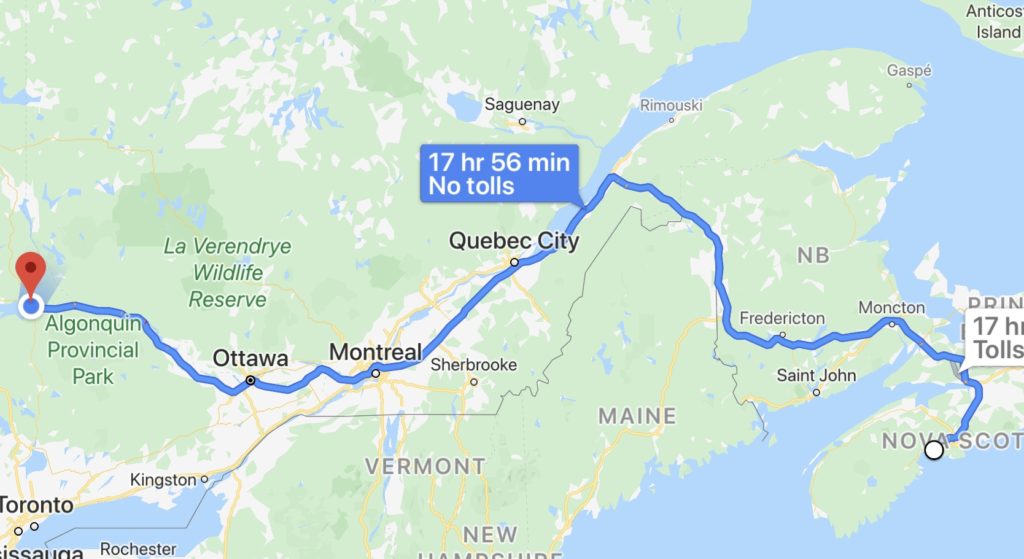 Keep in mind this is all happening during the Covid19 pandemic.  As of the writing of this, we in Nova Scotia currently have no active cases. Yukon has no active cases.  But there’s a whole lot of stuff happening in between.  We all will have to be extra careful. Once back home we’ll be quarantined for fourteen days as per Public Health orders.  As Francois said: ‘Kathy, sometimes you need to choose to do the right things for the wrong reasons or the wrong thing for the right reasons’. I’m still not clear which of the two we have chosen but I know in my heart it feels right. 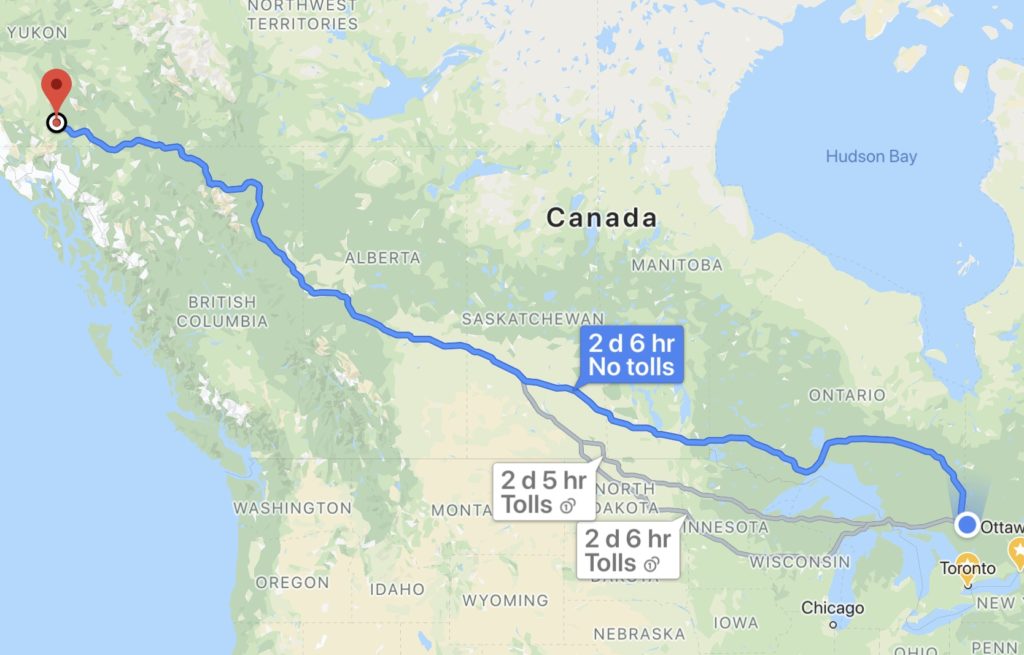 So, the plan was set and agreed upon by both parties. We set off for North Bay, Ontario, stopping once for the night, buyer grabbing a gruelling long flight from Whitehorse. We arrived all positive and excited. Francois immediately jumped out to inspect. Cursory first look.  All good. A more thorough check showed excessive cupping on one trailer tire. Not the positive proud presentation we had hoped for when we met the buyer the following day. Keep in mind this deal was sealed, sight unseen. The reputation based purely on the merit of this blog (and believe me, I blog the good, bad and sometimes ugly) and a strong sense of two honest trusting parties. 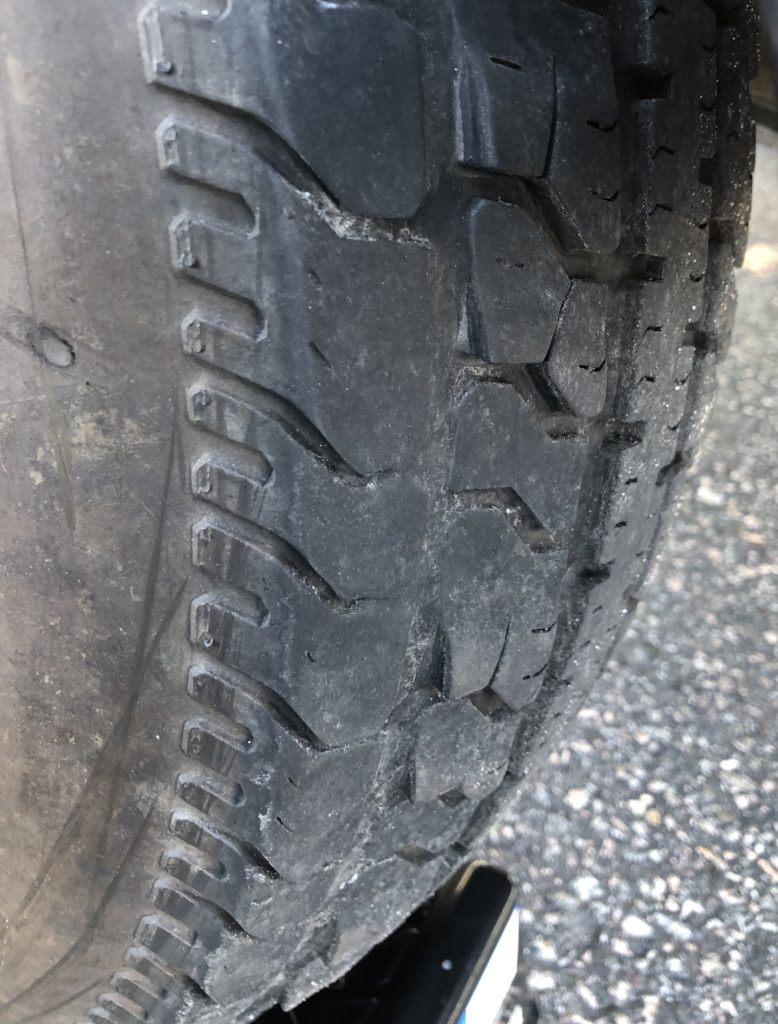 As if the buyer didn’t have enough to worry about…jet lagged, humongous rental tow beast to get used to and trailering a 26’ sailboat 5000 km through six provinces safely over seven days by himself. Without going into too much detail, and the fact that it was a Friday in a cottage country/ RV/boating region in the middle of summer, we took our chances and trailered to a nearby tire expert.  It was obvious he didn’t have the time, but he took the time. We asked a multitude of questions, had him mount two new tires and hoped this would be enough for a safe journey home. A million thank you’s Alex for making it right for us all.

On to the closing details… 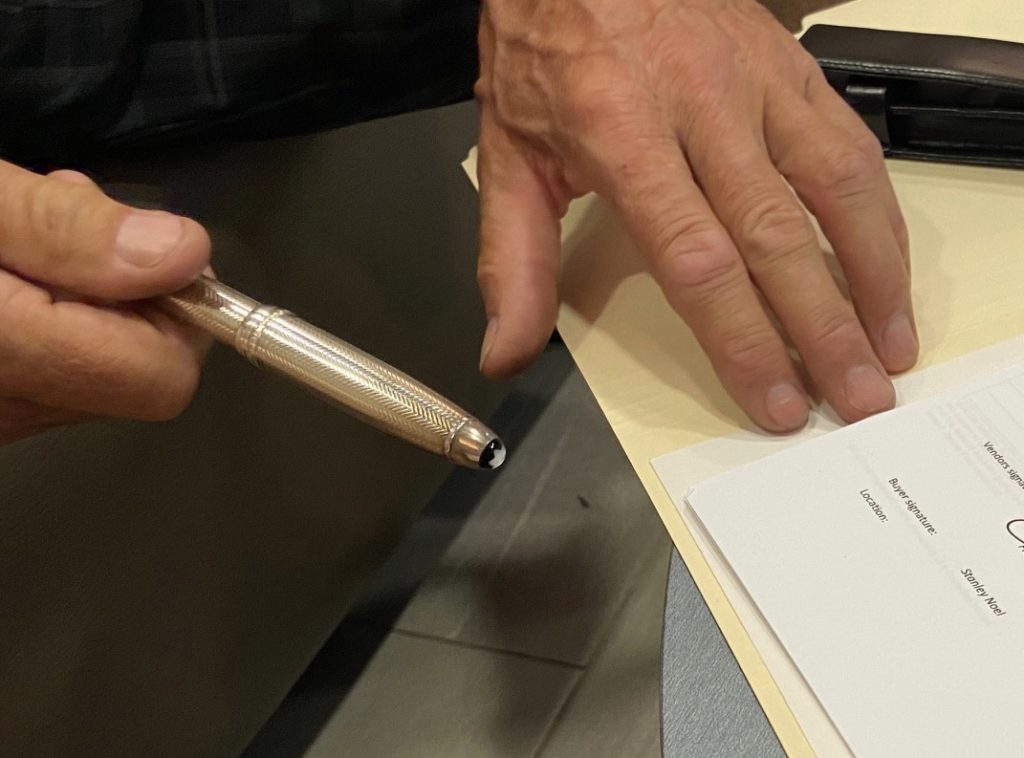 This is the pen I purchased for Francois several years ago while in Paris. It has been used for significant milestones in our life. When we purchased R.E.D., our tow beast, our condo buying and selling, our little RED by the Sea purchase. It was first used during the handover of Francois’ military command in Shawinigan, Quebec so it seemed very fitting that it be used for this final handover….one captain to another. 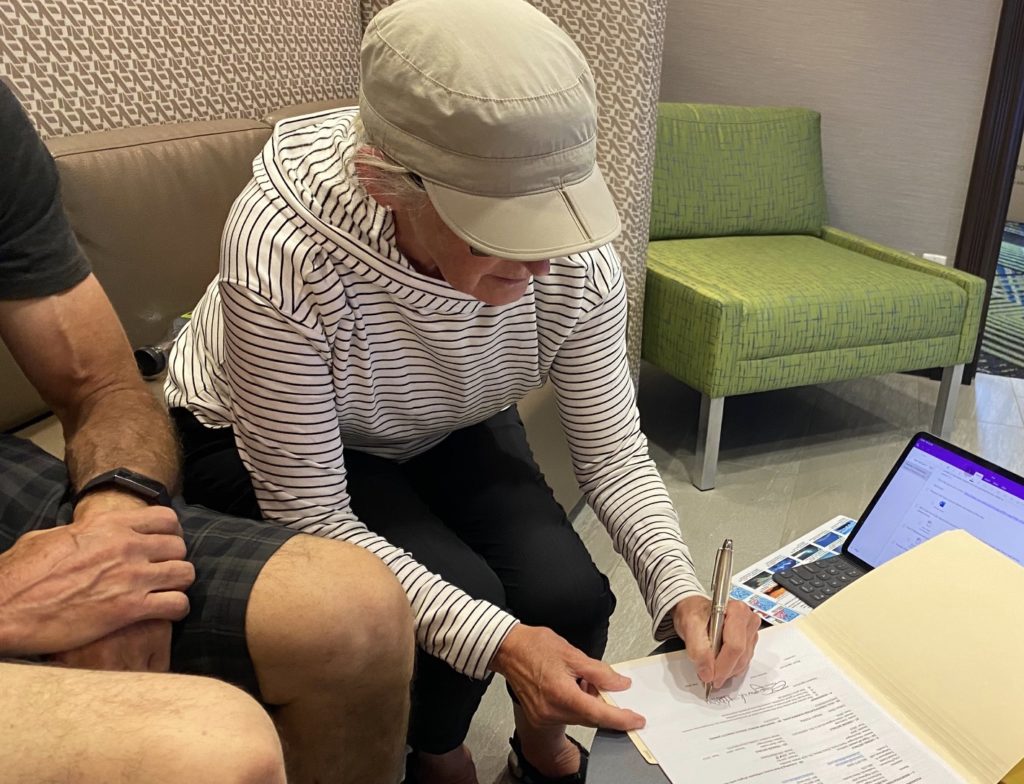 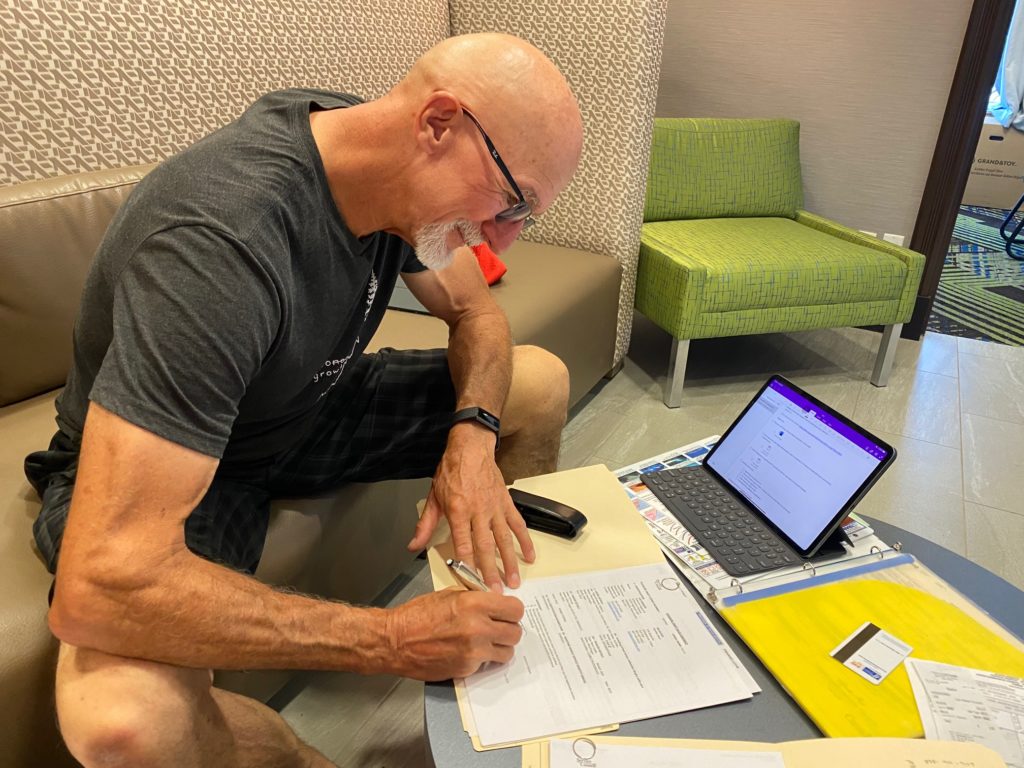 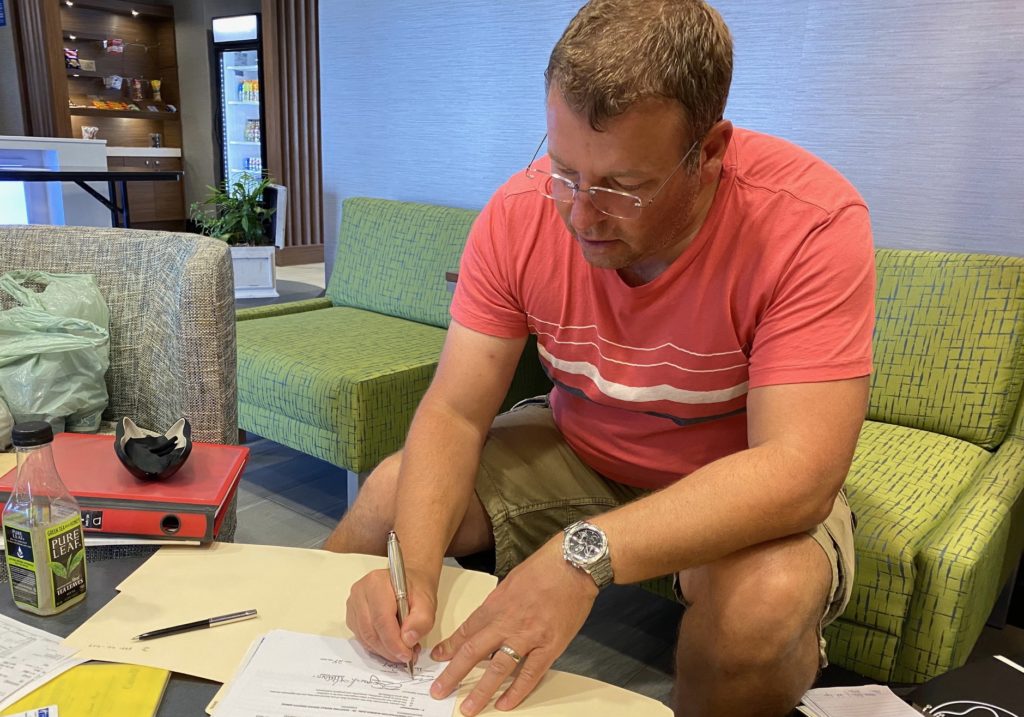 We feel honoured that the new owners are keeping R.E.D.’s name, her original home port of Montreal and the poppy logo referencing Francois’ military service. It’s part of what gives her soul, part of who she is. Because of this generous gesture  there is less finality and more of a continuation…a passing of the torch so to speak.

As a final act, I hid her heart somewhere inside the cabin for them to find. A little something to keep her safe on her long journey, a little treasure hunt for when R.E.D. reaches her final destination. 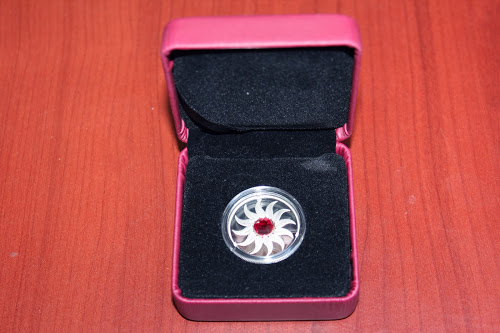 It’s a pure silver Canadian minted coin we bought in 2012 just after signing the contract to purchase R.E.D. In the centre is a Swarovski  garnet red crystal we chose because of it’s significance of safety, strength, prosperity, abundance, and gratitude. 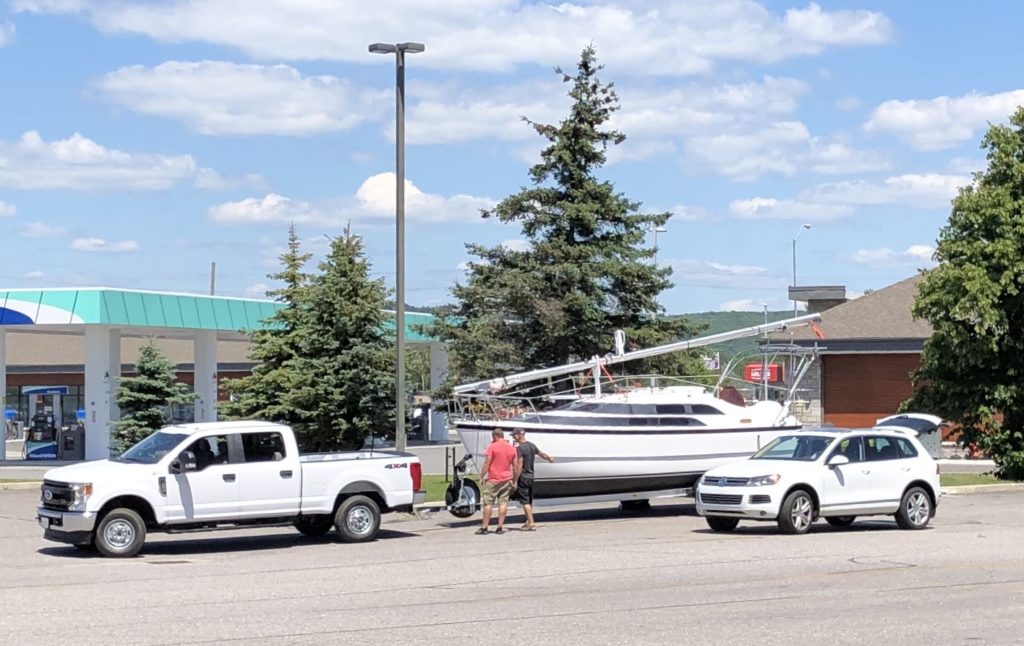 …so many details! Trying to fit in answering as many questions as possible before departure I can imagine we left R.E.D.’s new captain with an exploded head. 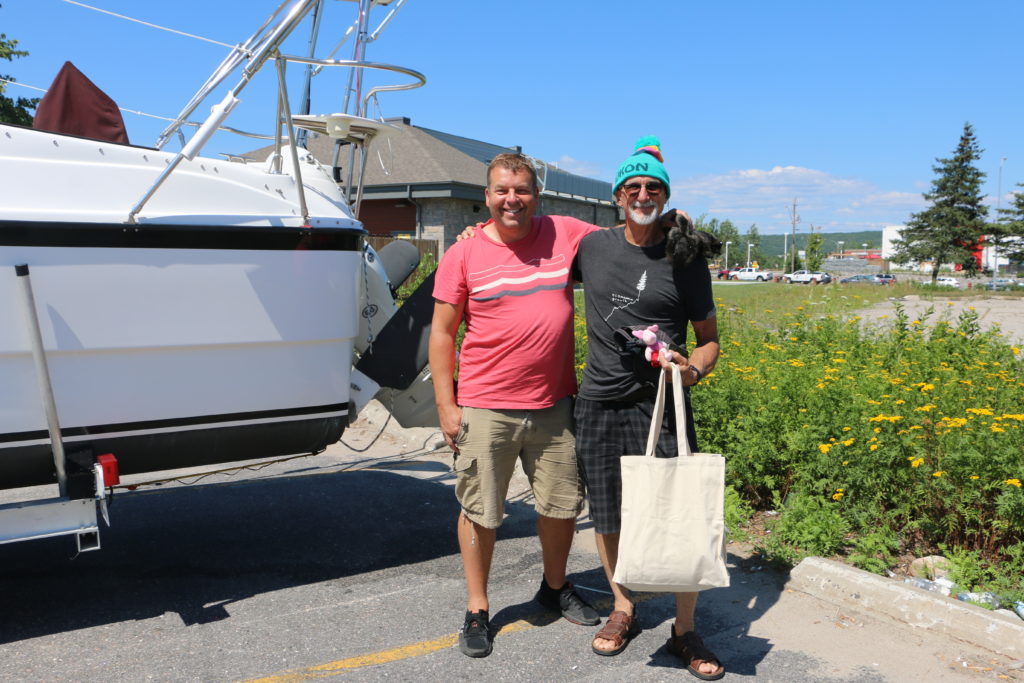 After all the rushing and stress of it all to make it right and safe, we bid Stanley farewell with a promise to stay connected. Strange how this simple act of selling a boat has put into action a tidal wave of new possibilities for us all.  Even Piglet and new buddy Yukon Beaver are forever linked. 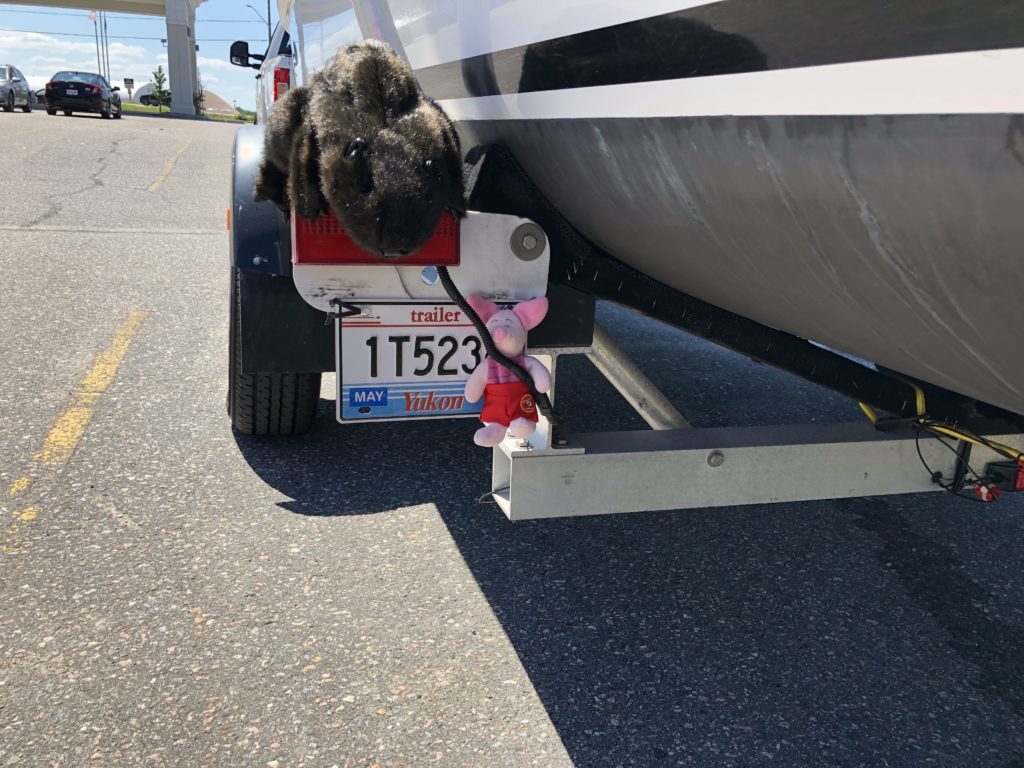 Stanley and family, we felt such a wonderful and immediate kinship with you. We wish you nothing but good health and continuing adventures aboard R.E.D.

I delayed publishing this post until I had word from R.E.D.’s captain that all was safe. He seems to be enjoying the attention R.E.D. is garnering on this epic journey back to Whitehorse. May the road rise up to meet you.  May the wind be always at your back. May the sun shine warm upon your face…and may your compass always be true….and may those tires hold out at the very least till you’re safely home. 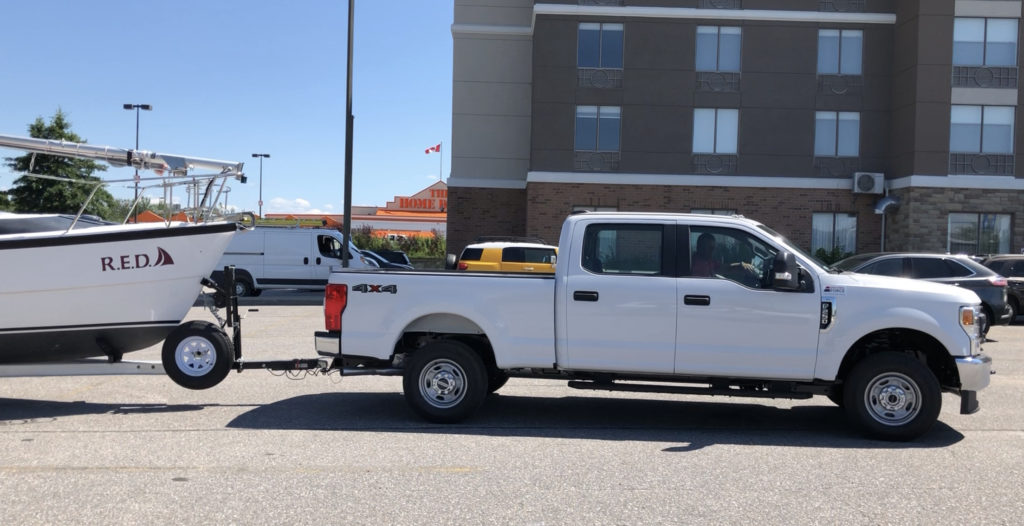