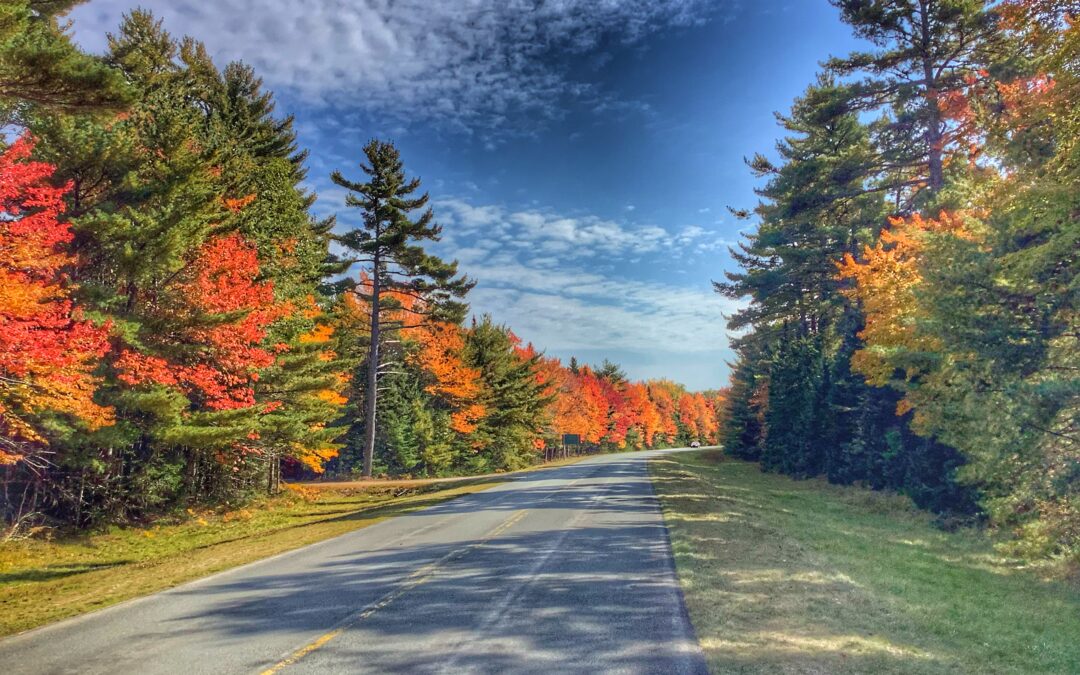 Our final camping trip for this year was a trek not far down the road to Kejimkujik National Park. Kejimkujik.  That’s a mouthful isn’t it?  Pronounced “Ke – jima – koo – jik”  and translated from the Mi’kmaw to mean ‘little fairies’, it’s simply referred to as ‘Keji’ by locals.

Spreading over 400 sq km , it’s a mecca for hikers, canoeists and kayakers , bird watchers and campers, designated a dark sky preserve and the seaside portion is  a wilderness protection area. Over 80% of Kejimkujik is accessible by canoe or hiking only with 47 backcountry camping sites spread out over 17 lakes and connected by multiple rivers and streams. 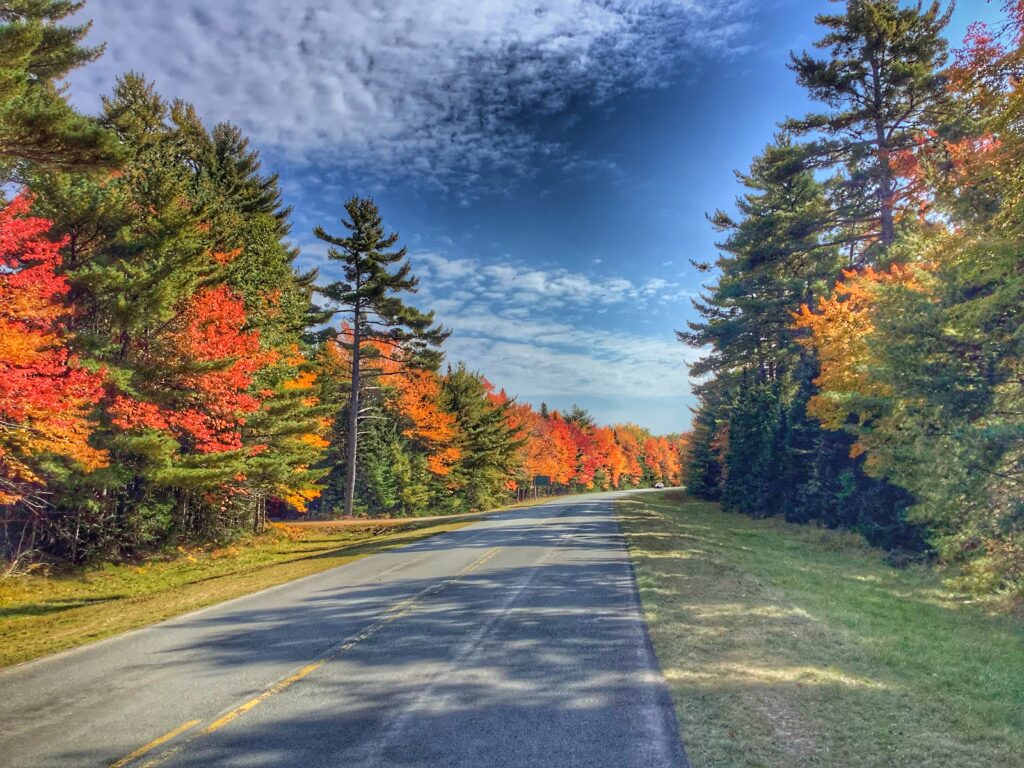 We chose this as our last adventure at this time of year to see the fall colours at their optimum and we weren’t disappointed.  We expected it to be chilly so came prepared with lots of extra layers, gloves, toques and wooly socks, because as a friend of mine says ‘any fool can be cold’. But it was anything but cold. More like a moderate summer day with mostly sun and 20 deg temperatures.  Nights were cool so firing up the camper heater for a few minutes took the humidity down.  And of course there was the traditional camp fire with toasted marshmallows. 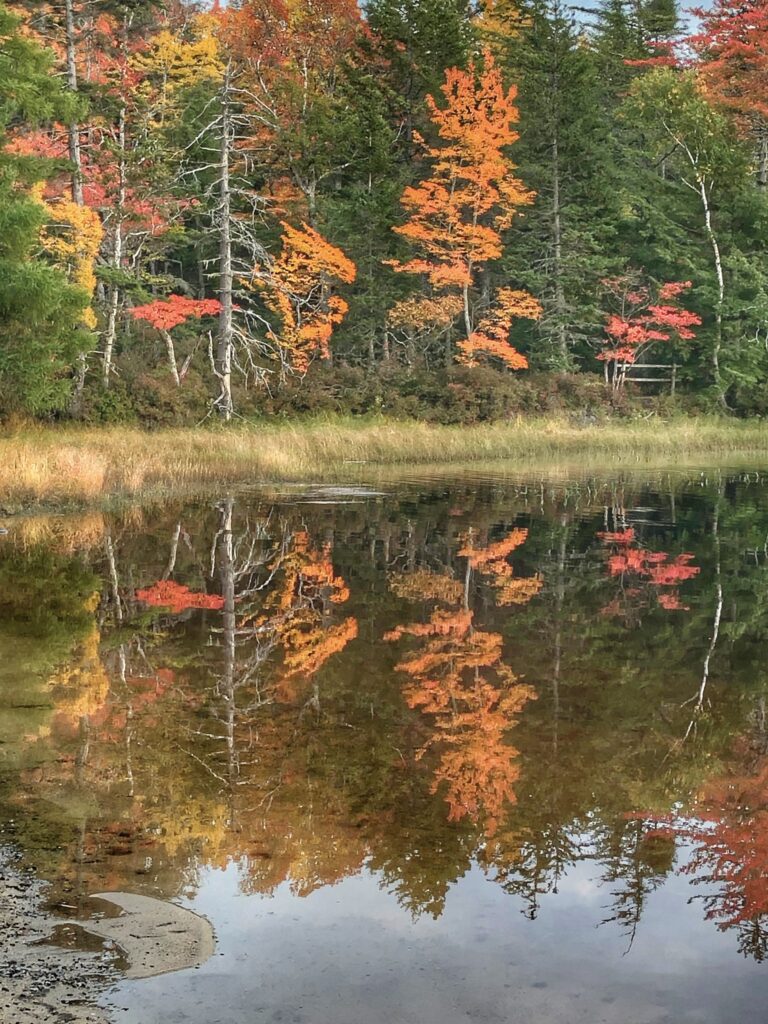 At Keji, the serviced sites are with electricity only so this was our first time dealing with no water or sewer hookup…a kind of modified ‘boon-docking’….four nights/five days to see just what we could manage with using our internal storage tanks, and it gave us three full days to explore. Each site at Jeremy’s Bay is very roomy too, strategically placed so very private and view of neighbours is minimal.  Plus there is a definitely advantage of camping this time of year. Even over the weekend there were very few visitors. 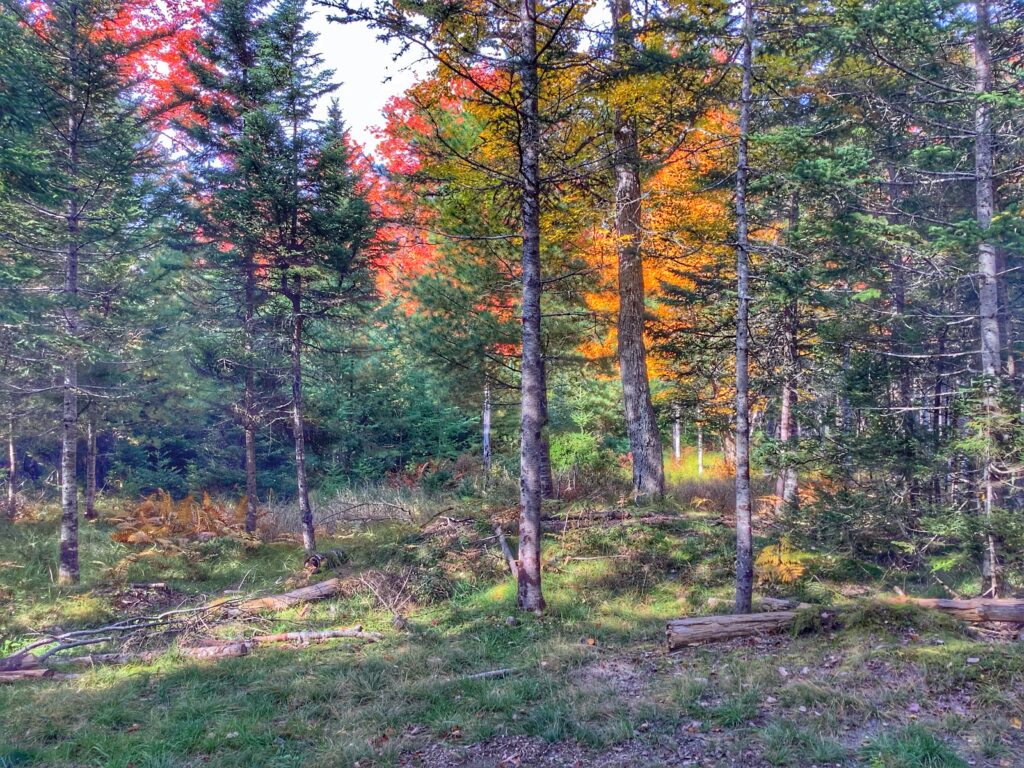 After setting up and enjoying a quiet supper, we took a walk around Kejimkujik Lake just before sunset, returning to light our evening campfire and discuss where to go the next day. 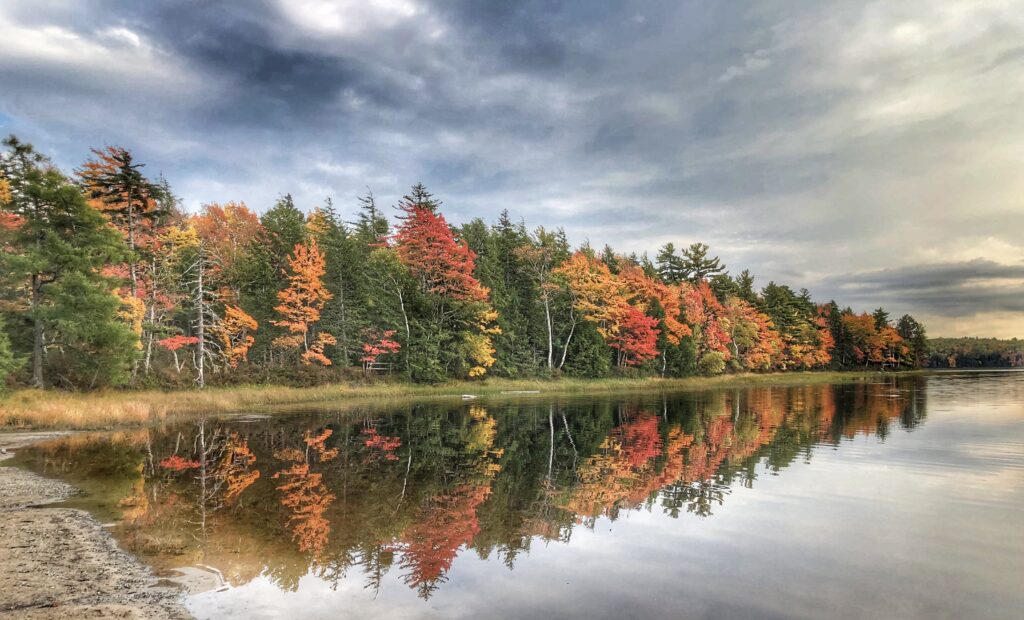 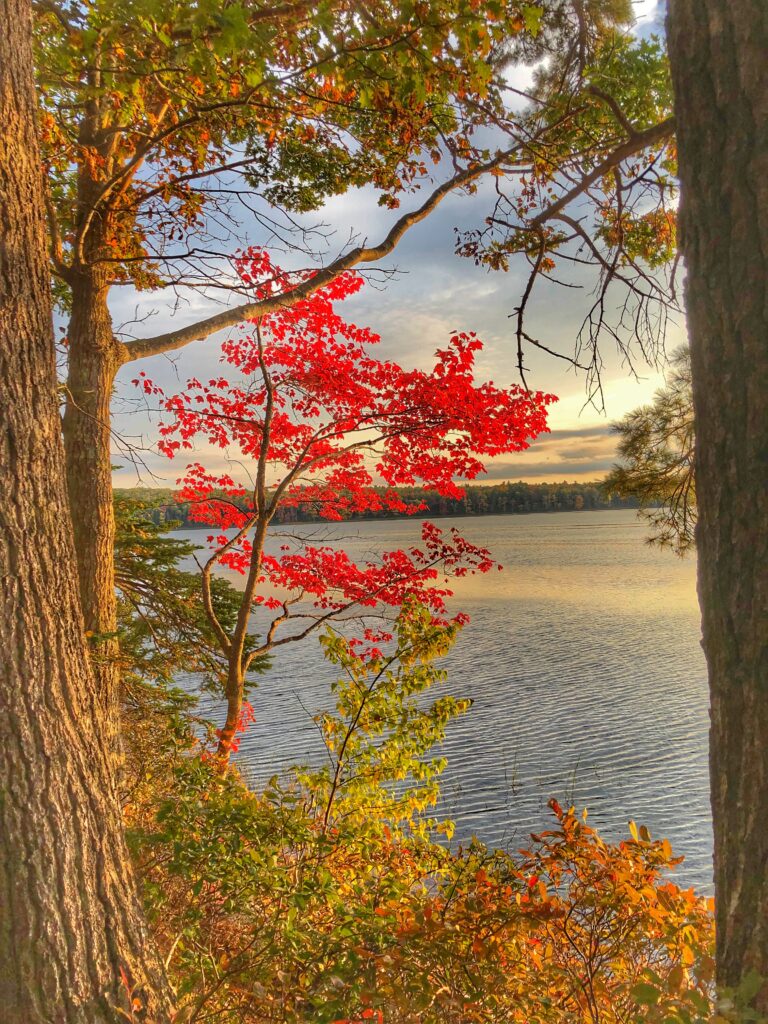 The choice for the day was Kejimkujik Seaside Park which was an hour and a half drive from the main camp ground. The trail to the beach through colourful bogs was a 2.8 hike ending at the stretch of beautiful white sand of St Catherine River Beach. 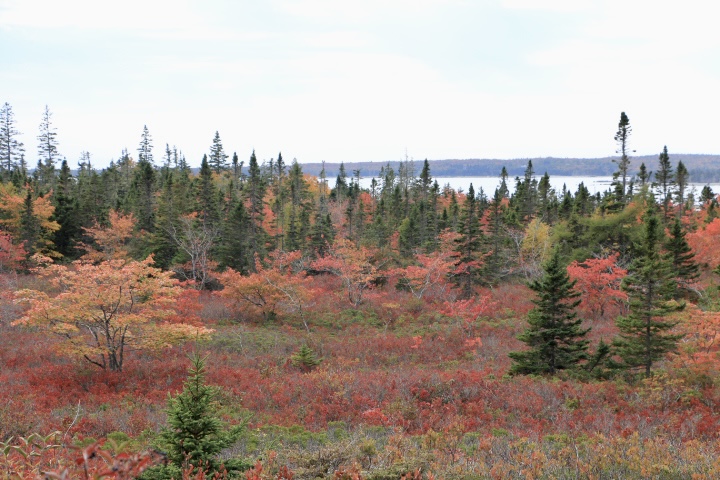 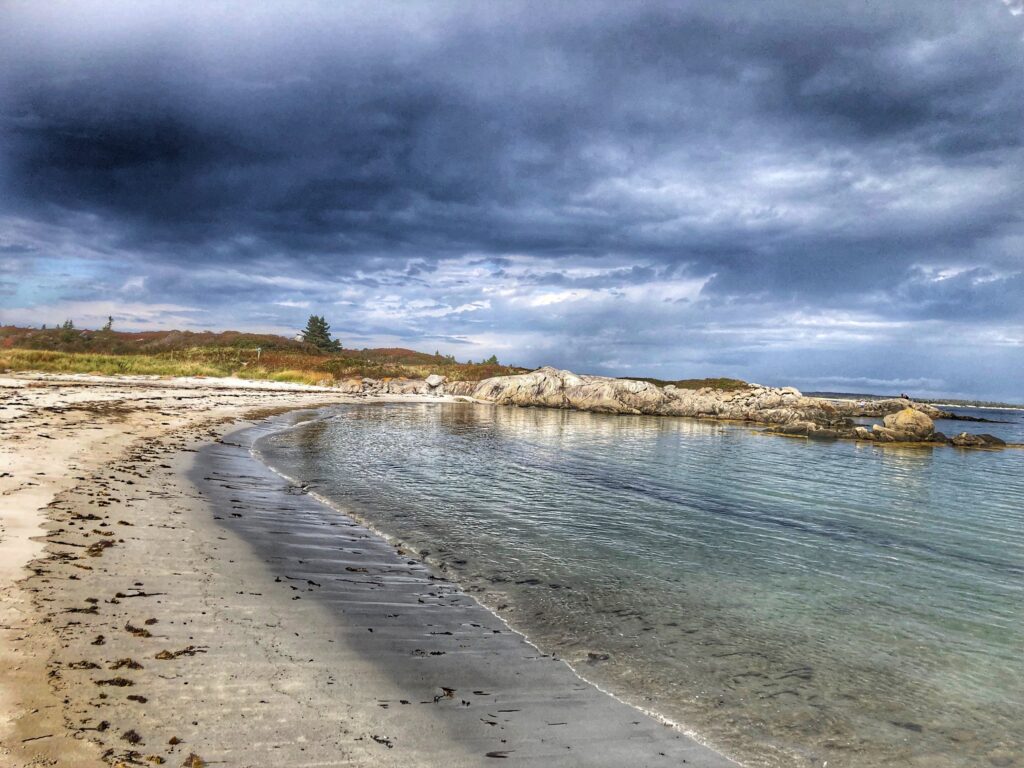 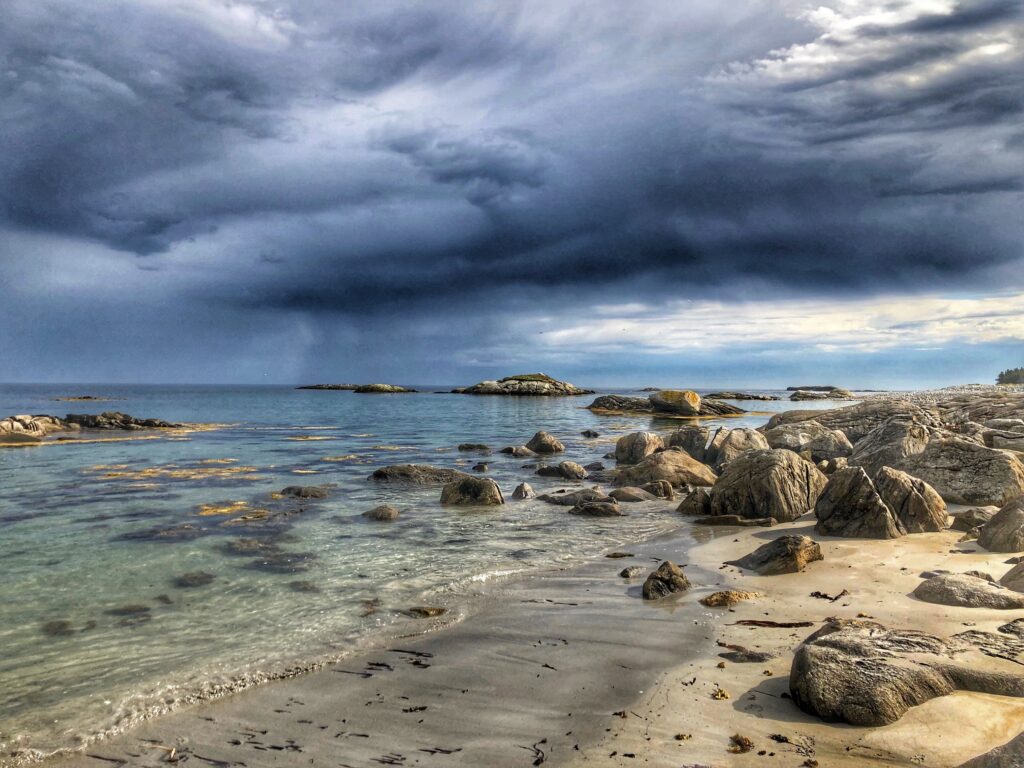 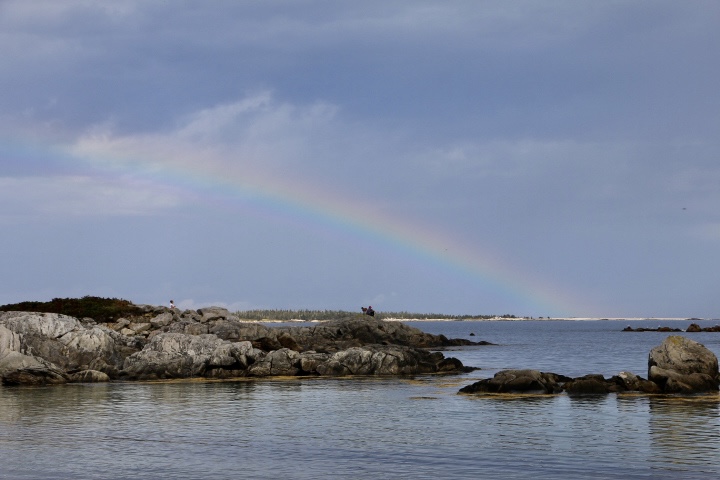 Day three was spent cycling around the park.  The trails and roadways are easy and safe for the most part so we explored for the better part of the day, picnicked at Merrymakedge Beach then cycled back to our camp site for a respectable 30 km ride. 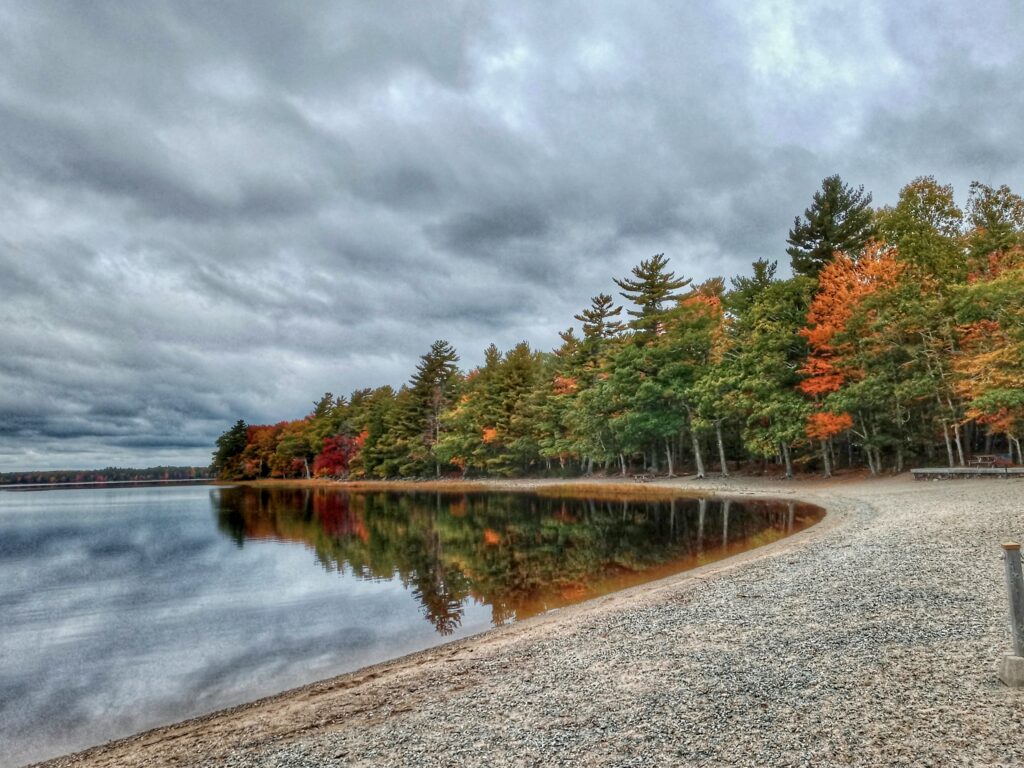 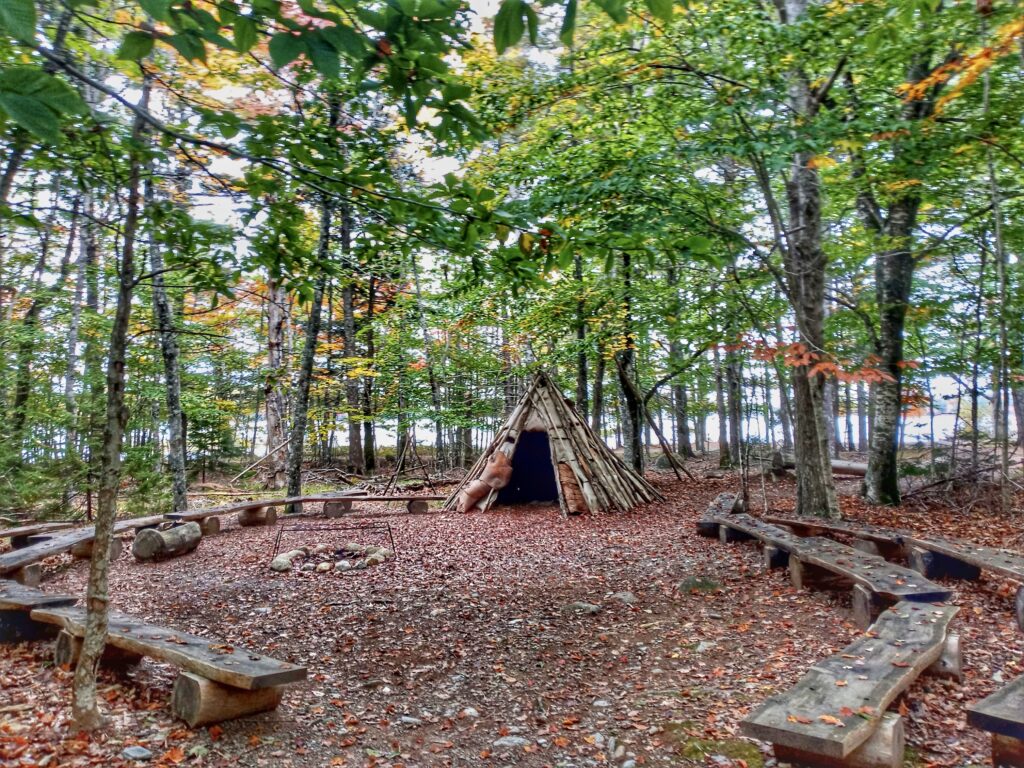 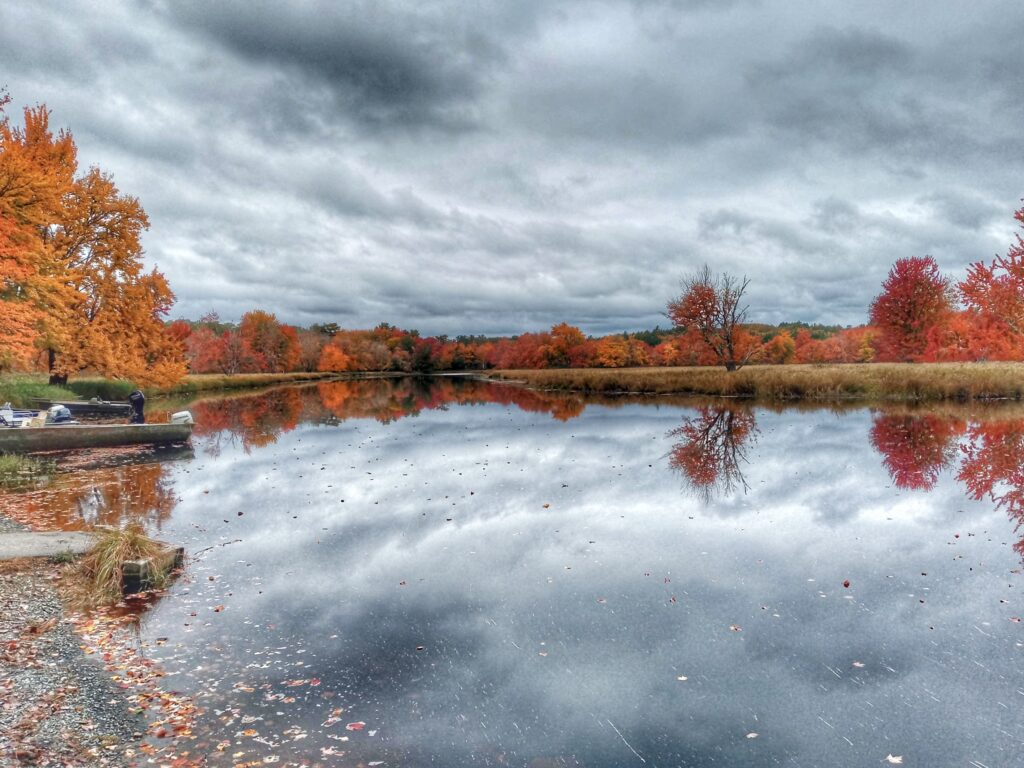 Kejimkujik Lake is fairly large and dotted with small islands each with designated tenting sites.  While we were eating our picnic lunch we saw a young couple, with two young kids and two cats on leashes piling their belongings into a canoe presumably heading out for an overnight adventure to one of these islands.  Imagine, two adults, two kids, two cats one canoe and  all that gear.  So brave!..or extremely patient…or both.

We continued on the bike path along the Mercy River then headed back to camp.  When one reaches ‘a certain age’, simple is so much better, don’t you think? 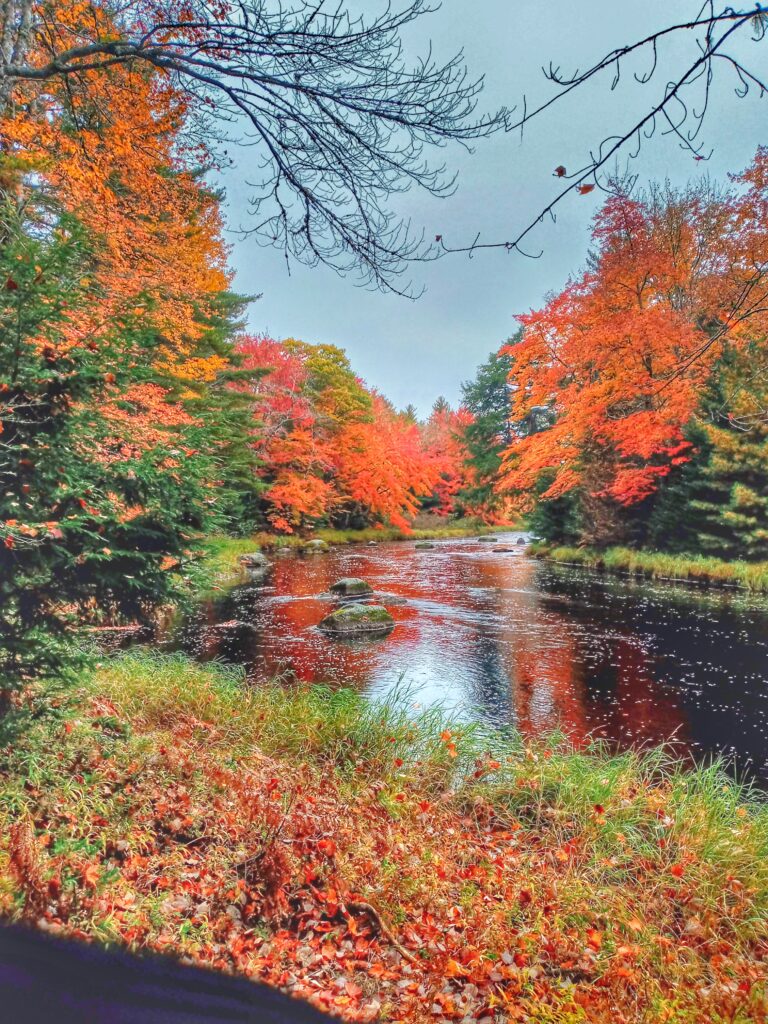 For those who prefer a little something out of the ordinary, this park offers Oasis Pods, a cross between a tent and pop-up camper.  How fun is that?  Imagine snuggling in bed at night with a view of the stars because this park is also a designated dark sky preserve with almost zero light pollution. 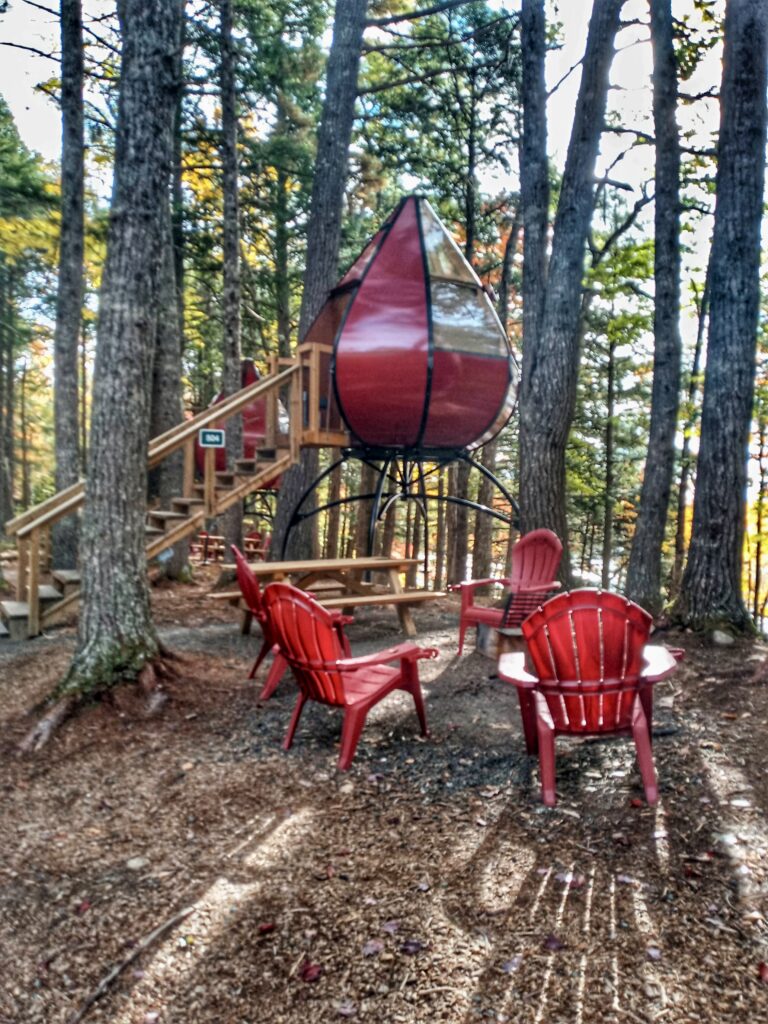 On our final full day we braved the newest Keji trail, Ukme’k, which means twisted in Mi’kmaw, a 12.6 km medium level winding hiking trail along the Mercy River.  Near the end of the trek we both realized that 5 to 6 km is about our maximum for daily hiking.  Sore knees, sore feet and ankles and we were more than ready to head back to camp for cocktails laced with a couple of ibuprofen. 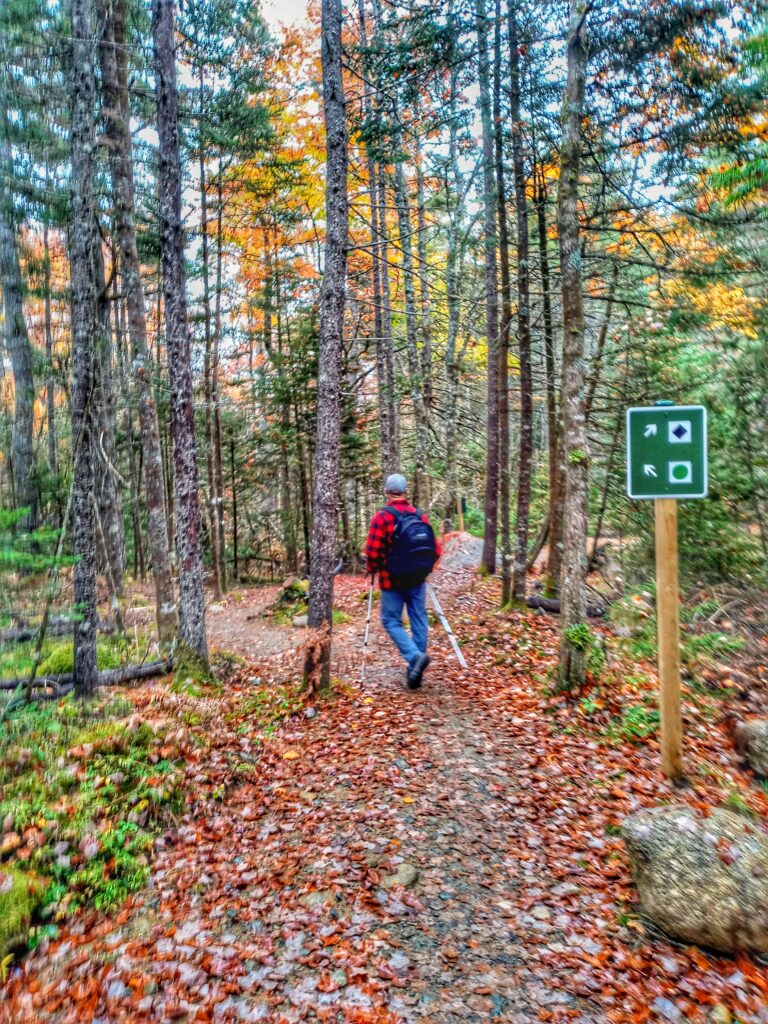 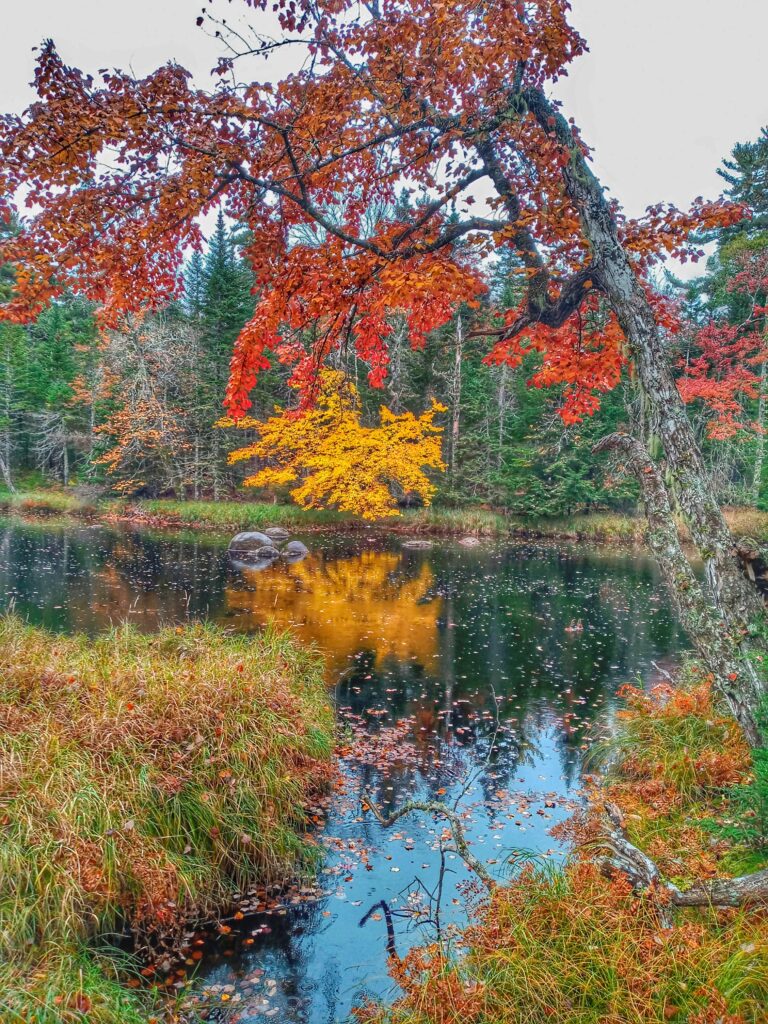 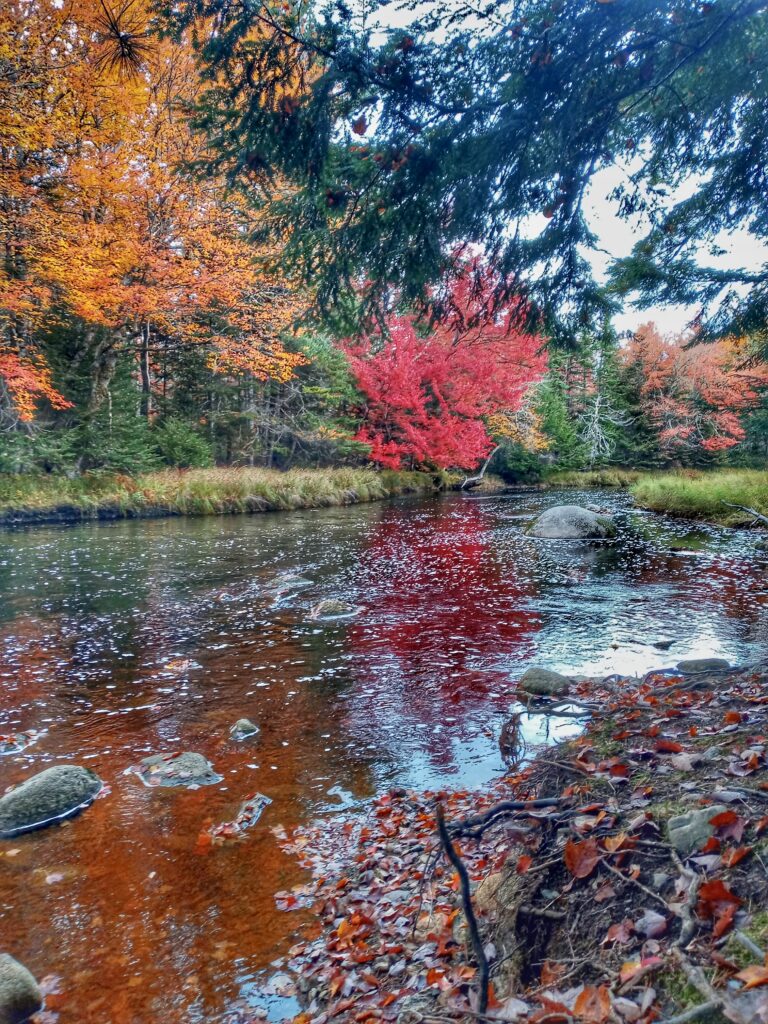 Well, we made it to our fifth day away.  Water was easy to conserve, having learned many good lessons after seven years of boating with limited resources. Potable water was available to fill our tank at the park entrance and there were filling stations throughout the park every few 100 feet as well as super clean toilet and shower facilities.  Our grey water was at capacity as was the black water tank but we easily pulled through the dump station our our way out of the park.  F purchased a back-up portable waste tank for a ‘just in case’ moment but we found we didn’t need it for this trip. 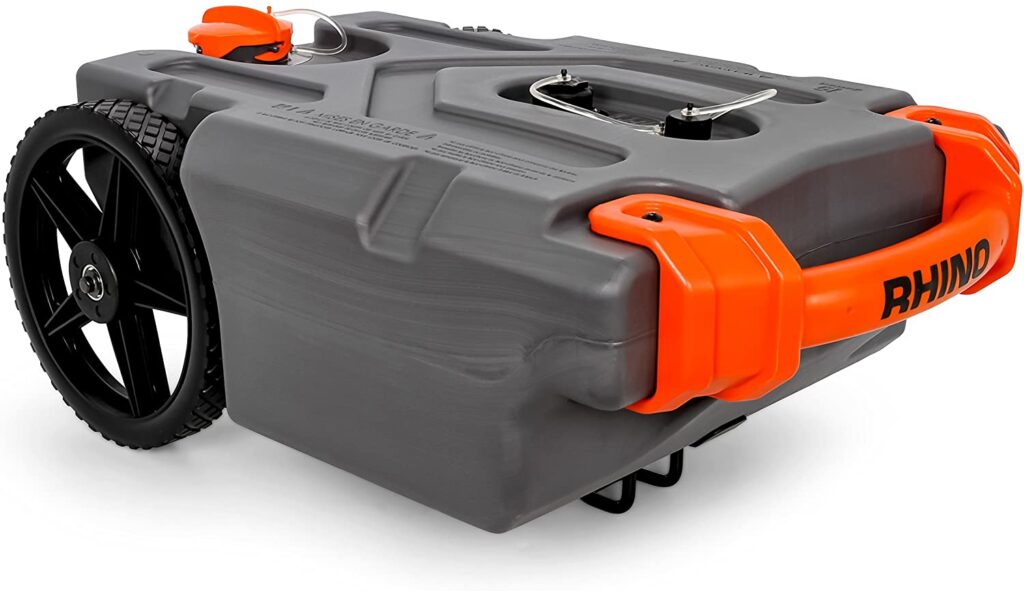 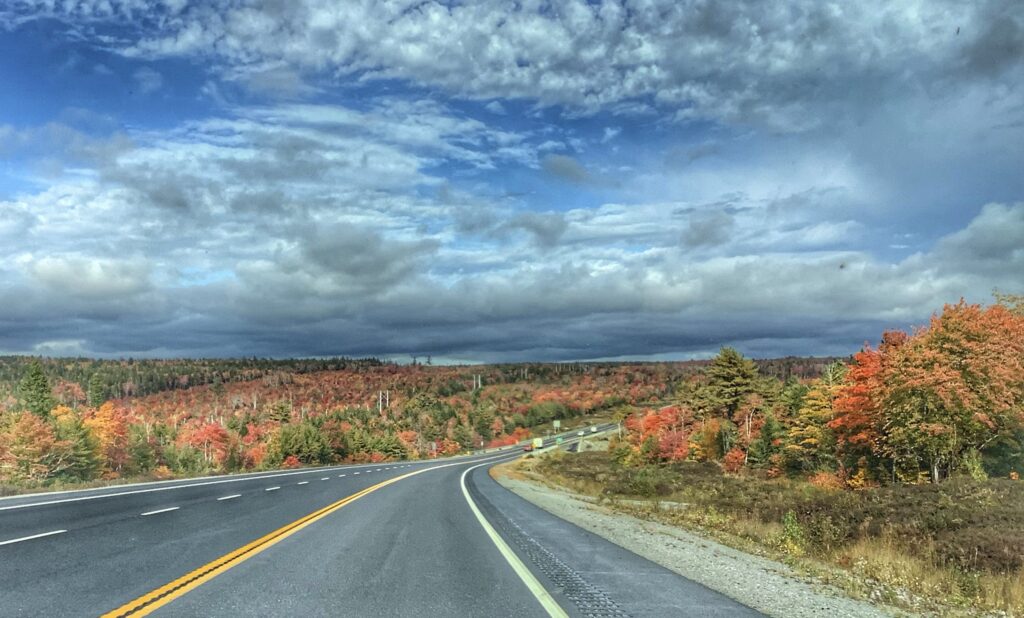 The trip home was beautiful if just a bit more muted in colour.  We think we may have chosen the best week for leaf gazing now that we’ve had a couple of days of rain and wind and any of the leaves have fallen or turned brown.

On reflection, we both feel Fundy was our favourite place overall.  Five Islands and Keji tie for second place with the Ovens a close third.  Just four outings for this our first year with our little turtle on wheels.  There are already plans in the works for next year but for now RED II is parked in our driveway, unloading and cleaning underway and appointment made for fall inspection and winterizing, after which she’ll be put to bed until next spring.

Back at our little home by the sea we begin to prepare for guests from away. We are so very thankful that for the most part we have remained healthy throughout this last couple of years of pandemic restrictions and that with a sprinkle of caution we can begin to welcome friends and family who have been eager to experience some east coast hospitality.