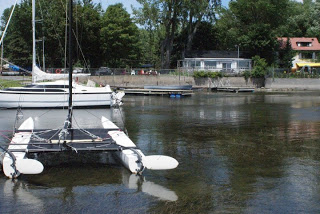 …new beginnings or maybe a continuation of past threads.  Whatever, this next chapter of our lives that is unfolding is looking pretty exciting from where we stand….
Francois absorbed all he could during those brief outings with his
brother and because of his brother’s vast knowledge of sailing Francois learned to do things the right way.
Having more extensive sailing than Francois didn’t necessarily mean I learned to do things correctly. In a race (for some sailors I crewed with) winning was everything and quite often corners were cut and safety was quite often sacrificed in order to be the first over the line.
We both realized if we were to continue along this path we would need
some structured training – Francois, to build on his already solid
understanding and me to try to unlearn a lot of bad habits. Last year we joined a local boat club that offered the chance to earn our White Sail levels.  A storm analogy is significant here as our joint passion was now reaching gale force. The look on Francois’ face on our second day out told me that he had been bitten by the sailing bug and that his case was terminal.
The instructor said he really should not have let his novice students out by themselves in 12+knot winds.  One of my jibes almost send Francois into the water but we went home that day giddy with excitement. Most recently while attending a social function at the club we spotted  ‘her‘.
A white-hulled beauty moored at the dock. Like a siren she called to us.
She looked like a very sexy motor cruiser but she had a mast. Hmm!  We were told she was a MacGregor.  Thanks to Google and immediate internet access we were able to determine that she was a hybrid – part cruiser, part sailboat.  Huh! No keel – now what kind of sailboat has no keel? One with water ballast and a dagger board. Ah ha! Curiosity peaked.  Required just 12″ of water.  Can easily be launched from a trailer.  Really had our attention now.
That night we went home and started researching.  The more we read the more we saw our future path unfolding in front of us.  Within one short week we knew we had to have a MacGregor.