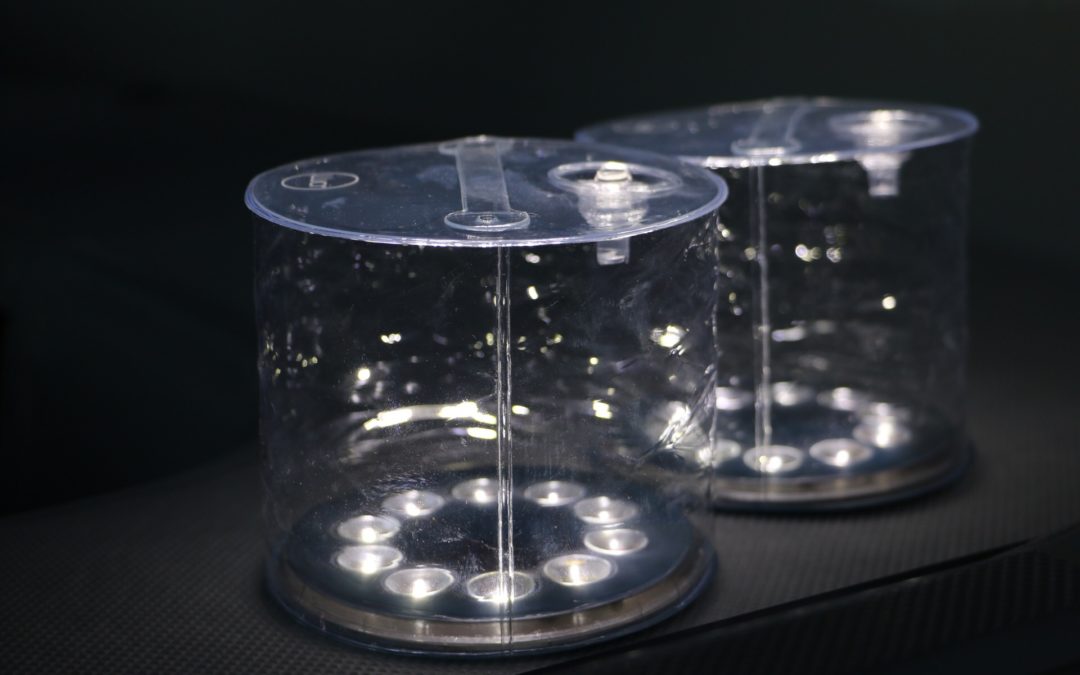 Here’s a little modification recap.  Mostly meant to provide additional security and improve independence for this and future adventures it was a big financial output this year but we can now untie the lines and feel we are well prepared. And should we be fogged in along the Saint-Lawrence which is very likely this time of year, we have Gen the Generator to provide power at anchor for that much needed morning coffee (story here and here) and to fire up our little electric heater to take the chill out of the cabin. Mostly esthetic, the Weather Station (story here) was added to give us an indication of changes in barometric pressure, temperature and humidity but the added benefits of having a safe place to store charts and navigation tools made it a step up from ‘pretty’. A Place to Hide All Precious Cargo

Solar  Luci Lights will be used to supplement our mast light when at anchor.  Solar instead of battery power is always good. …and little ‘AA’ battery operated LED cabins lights can be used at night instead of using the boat battery.  Only thing missing in this picture is our evening cocktail. This  year we’re trying something new.  We removed all the bilge covers in the rear berth and found bins that fit securely into the depressions.  Lower priority items and less used are stashed at the back and the containers are small enough that they can be lifted out easily to access things stowed in behind.  Thanks to a great suggestion from our friend Beth we used large pool noodles to safely store fishing rods.

A word about balance:  we are very conscious about equilibrating load.  The weight of the extra 15 gallons of water port-side will be balanced with provisions starboard.  An eye’s view from land shows an even distribution and the onboard clinometer shows zero degree healing at rest and because the load sits low, the righting arm and centre of gravity should be at peace with each other. This sack made of breathable Phifertex holds 2 sets of full foul weather gear, long underwear, tuques, gloves, wet suits and will be stowed below.  Everyone we have talked to says to be prepared for the cold.  Hoping this will be enough. And regarding cold, who wants to fall in the Saint-Lawrence River with near freezing temperatures?  Life vests with safety harnesses, webbing life lines along both port and starboard with tethers have been added. Two sets of simple pole clips will keep our docking/locking poles secured and out of the way mounted just behind the companionway stairs. What’s left?  Well I guess the only thing left to do is provision.  That’s a personal preference thing. What works for us won’t necessarily appeal to another. I’ve spent the winter working on easy galley recipes and there will be new ones posted from time to time along the way in Sea Salt Galley Kat. We’re counting on being at anchor more often this trip but as with previous years what’s worked best for us is to count  number of days away from supplying and add a contingency factor of +20% to allow for bad weather and unforeseen delays,  There are lots of places along the way to pick up supplies though.  Oh yeah, speaking of our bellies, we have our fishing permits. …and some super duper lures thanks to  Tim the Master Fisherman, so hoping to snag a fish or three and Francois knows of places where we can dig for clams.  We may freeze but we won’t starve. A word about internet.  In a perfectly plugged in world we would by now have an internet booster but haven’t we already done enough for one year?  It’s on the list of improvments but the priority had to go first to those things that will make us safer.  We did however augment our data plan which included a super deal from our provider giving us a new iPad mini which hopefully will provide more latitude with blog posting.  Will see just how great that signal is along the Saint-Lawrence.

…and last but not least is what we have been referring to as Little Red, our new-to-us dinghy.  Names have been thrown around, suggestions offered but Francois has come up with what we think is the best of the best.  In France if you order a glass of red wine you ask the waiter for a ‘ballon de rouge’ so don’t you think it very fitting that our little inflatable should be called…

So that’s it.  Next time you hear from us we will probably be on our way.  Feel free to stop by to check in on us.  It will be an adventure for sure. 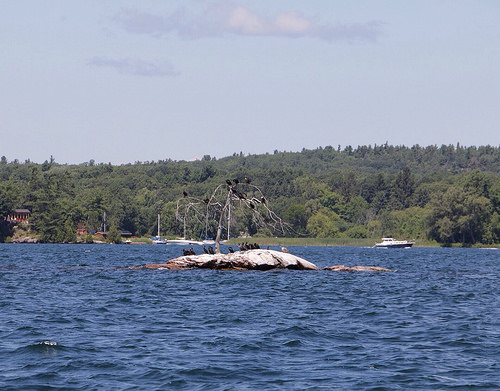 Another spectacular day on the water… 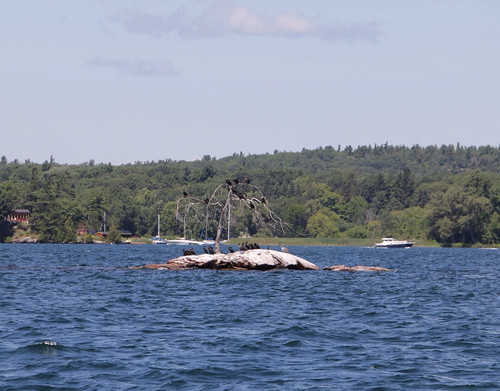 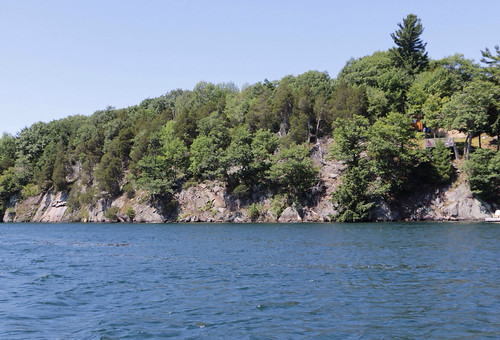 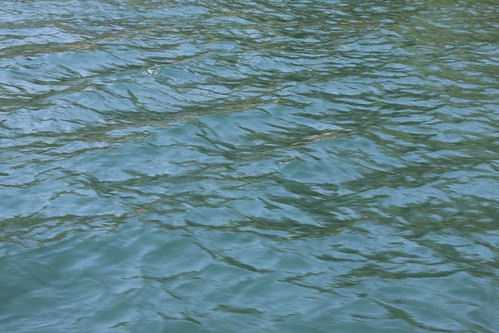 …somewhere in the distance though,
weather was forming…. 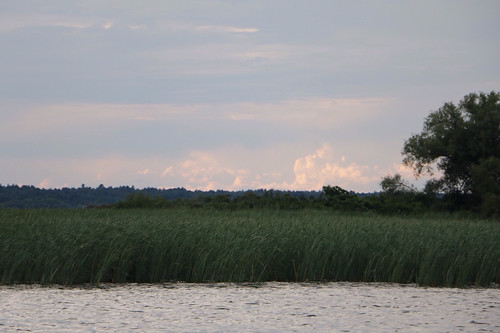 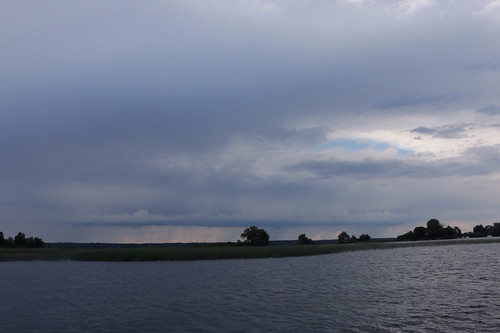 …at anchor for the night,
we waited for a chance to see the July Blue Moon,
our last chance before 2018…. 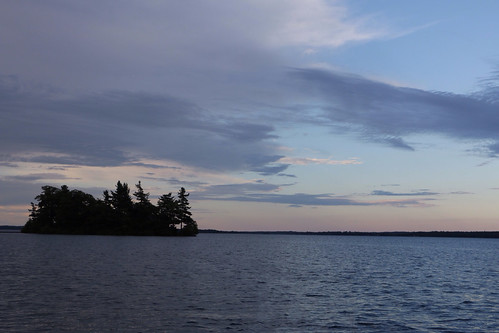 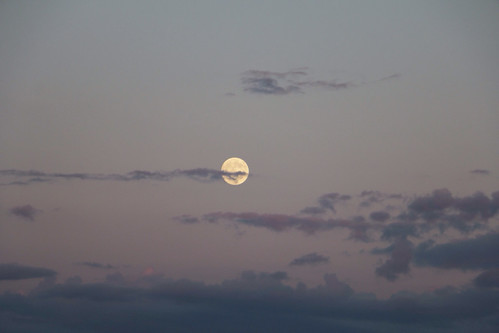 …and she disappeared behind the clouds. 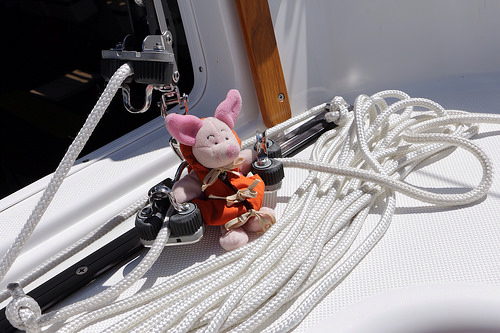 Our anchorage at Île aux Cochons (Island of the Pigs)

One of the Lake Saint-Pierre archipelago (near Sorel, Quebec)

it proved a secure place to stop for the day.

Our anchor held well in the mud bottom.

With our dagger board lowered one foot,

and port rudder down

there was no typical MacGregor dance.

We held fast all night. 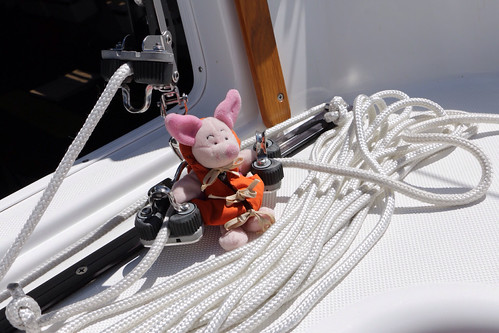 Here we prepared R.E.D. for the trip down the Richelieu, 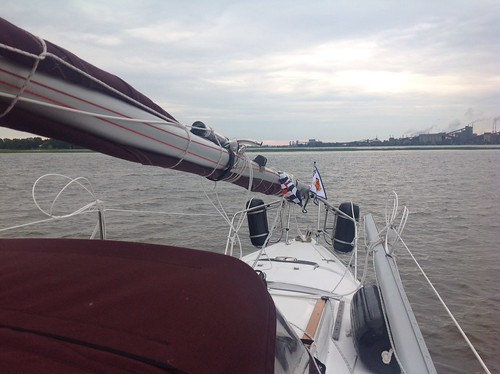 unstepping the mast, wrapping and strapping her
to fit under some low-lying bridges ahead. 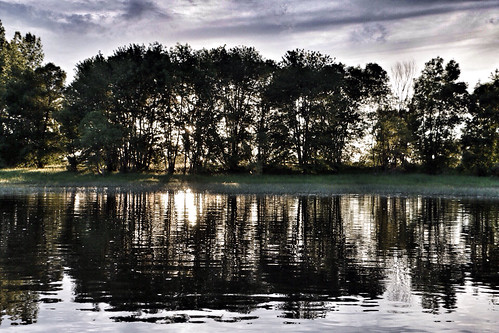 By the end of the afternoon we had the shallow bay to ourselves. 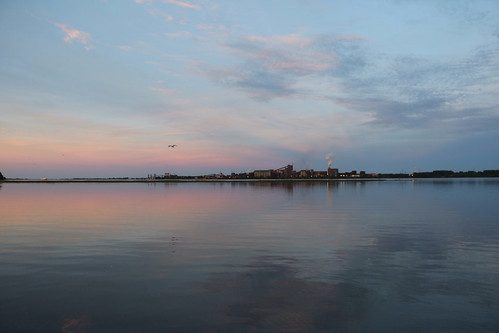 Our reward – the sunset a wash of watercolour. 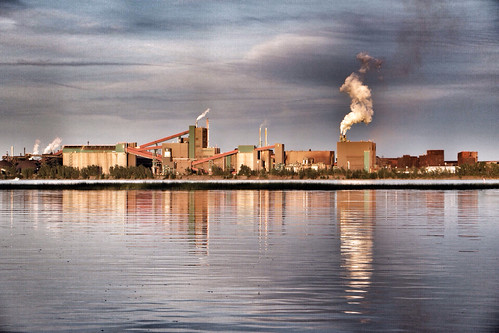 This is my ‘just because’ picture for the day…
because at sunset sometimes
even factories which may be polluting our environment
can be exquisitely beautiful.
« Older Entries