This is a day about what we did,

rather than where we went.

We have now headed back up the Hudson River

eventually to reach the Erie Canal.

It was a very hot and steamy day,

The canopy between the dodger

and biminy was installed to cut down on the intense heat.

We passed another of those super yachts…
…and you would think that after 4 or 5 times of open fore-hatch swamping
and wet bed linens we would have learned…
…for the first time we decided to anchor mid-day
using the boom as our drying rack for the duvet…
…and the cabin for the sheets.
…the best part,
we dipped in the river.
It was pure heaven,
water 72 °,
like a day at the spa.
We continued on once the current direction had changed.
Francois cooked dinner on the barbecue while underway, another first
(the underway part, not the cooking part)
while I took the helm.
By the time we had reached our anchorage for the night,
dishes were done (a treat from the Captain)
another dip in the river taken to cool off
and a beautiful sunset to bid us good night.
The simple pleasures sailing.
POST SCRIPT
It seems I have reached my Blog Spot photo limit
so until I can sort out what to do
you can if you wish visit our R.E.D. sails FaceBook page here
I will post a few of our pictures there for now.
Not a very happy Kat today 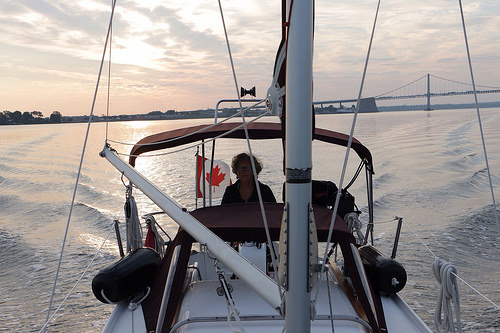 The area of the East River known as Hell Gate
was originally termed Hellegat
a Dutch term meaning
clear opening.
If you misjudge the tides it’s anything but
as we found out.
This time we, or in truth François made sure we got it right
We left a little after sunrise,
me at the helm
because of the getting back on the horse thing, Francois told me.
At least one of us was confident… 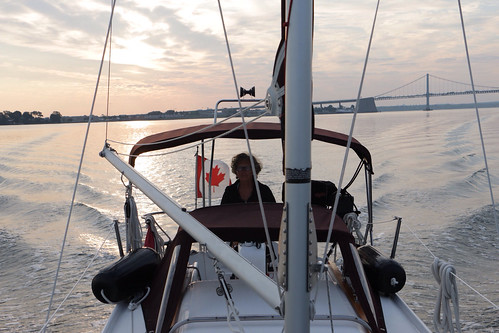 For you Law & Order fans,
here’s one of the buildings on Rykers Island
that we passed on our way to Hell Gate. 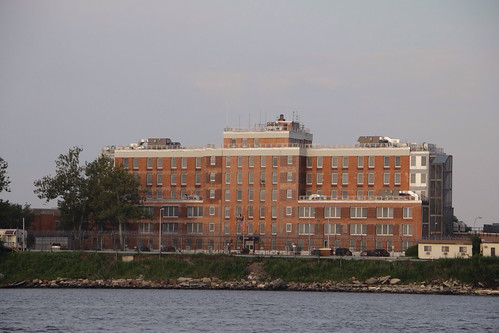 At 07:00 we reached Hell Gate Bridge
just before slack tide…. 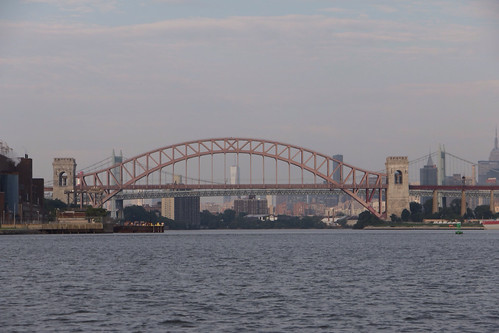 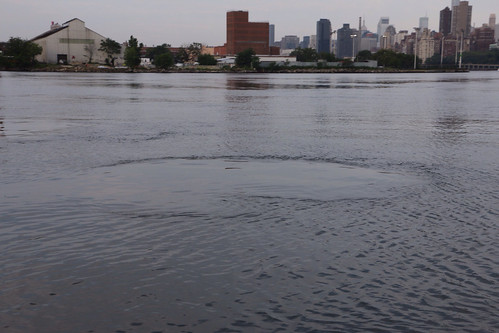 I have to say I was kind of disappointed

that we didn’t run into some turbulence at least.

Not even a cruise ship or water taxi to dodge.

I was so ready for it.

But we cruised through without incident

thanks to François’ good planning 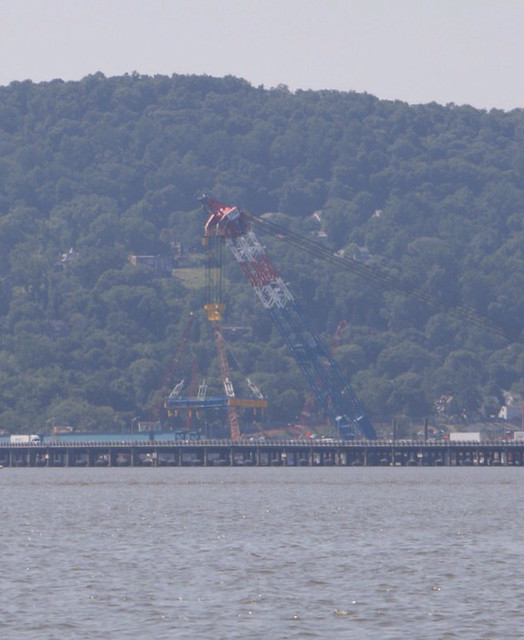 Because we were boarded AGAIN .

and during the boarding of 2 Customs & Boarder Protection agents

and warned us that we couldn’t anchor near the bridge.

…a fact of which we were very well aware. 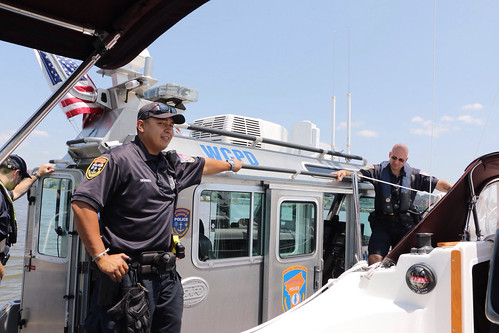 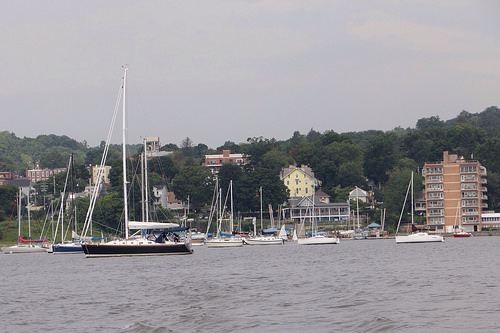 After leaving our anchorage,
we pulled up to the Nyack Boat Club.
They had no problem with us docking there
so we could walk the few minutes to a little grocery store on North Broadway. 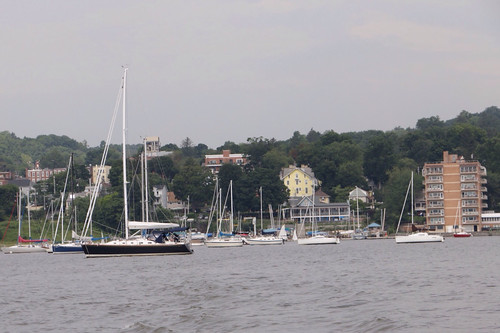 Ducking under the Tappen Zee Bridge
we unfurled the sails. 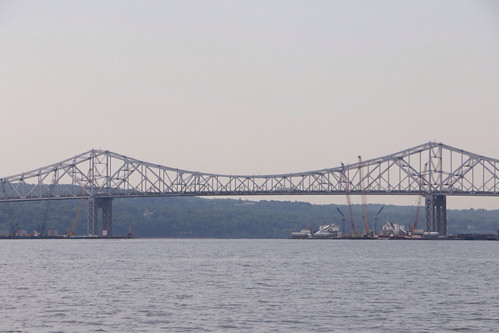 …but then the fairly calm day turned frisky. 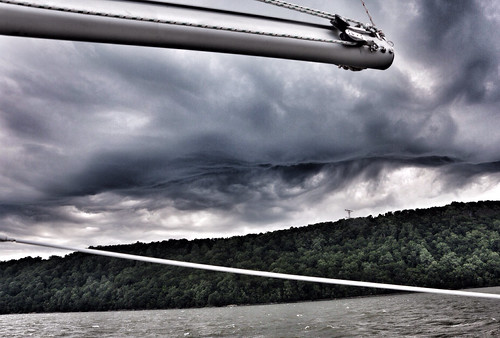 By mid afternoon, and kissed with a good deal of salt spray,
we found an anchorage near the
George Washington Bridge. 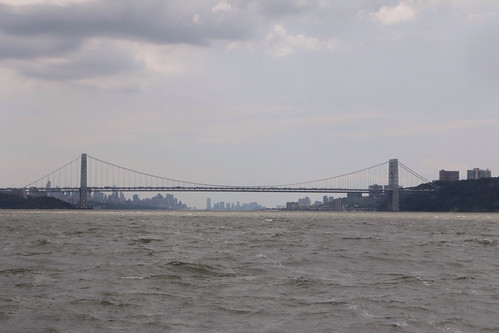 We now need to check tide levels,
a range of about 5′ from high to low
and just to be sure we are secure for the night
François set our second anchor.
It’s going to be a rock ‘n roll night. 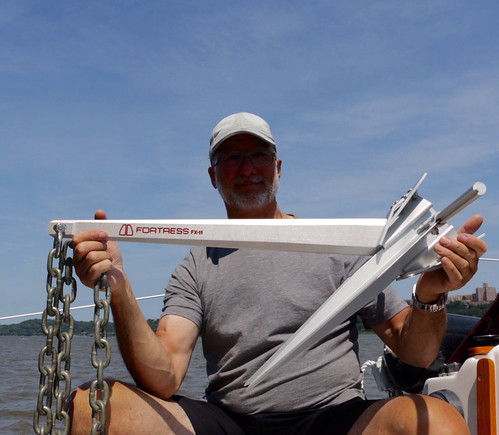 And with a view of the New York skyline

we close another day of our little adventure. 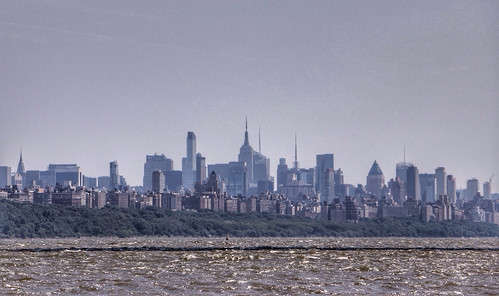