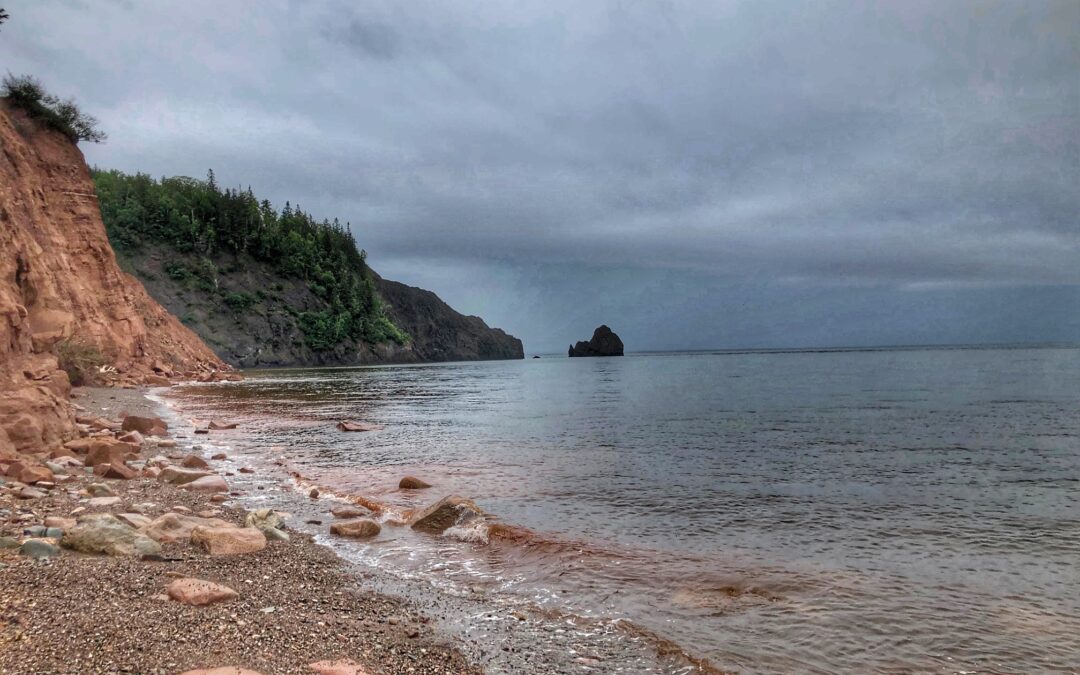 Our second camping adventure was even more enjoyable that the first, if that’s possible.  After seeing the amazing rock formations and sea caves of the Ovens Nature Park, F bought himself a book on local geology.  As it turned out this new location at Five Islands Provincial Park had so much more to offer. 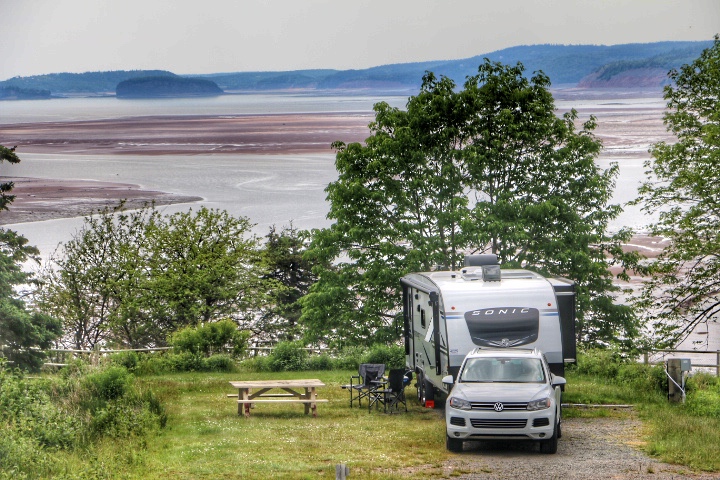 Stories of  Mi’kmaq lore , combined with the world’s highest tides and rocks formed when dinosaurs roamed the earth made this trip an adventure to remember.

Firstly, a little background about the legendary Wabanaki god-like figure, Glooscap, who  made his home in the Minas Basin of Cobequid Bay. As the story goes, when he slept, Nova Scotia was his bed and Prince Edward Island was his pillow. He lived here, admiring the beauty of the lands, until one day he found his medicine garden destroyed. The culprit? A Canadian beaver! Glooscap was understandably upset, and threw giant clods of mud at the mischievous and disrespectful beaver. The dam was smashed, and water began to flow freely. The mud, sticks, and stones created five islands that emerged in the rapidly rising tides. As for the beaver? He was trapped on one of the islands, and turned into gold.

Next, a little about this unique area, geologically speaking. Nova Scotia was once part of northern African and northern Europe  on the super-continent Pangea. If you like, here is a short but fairly complete article about the geological origins: Origins of Nova Scotia. 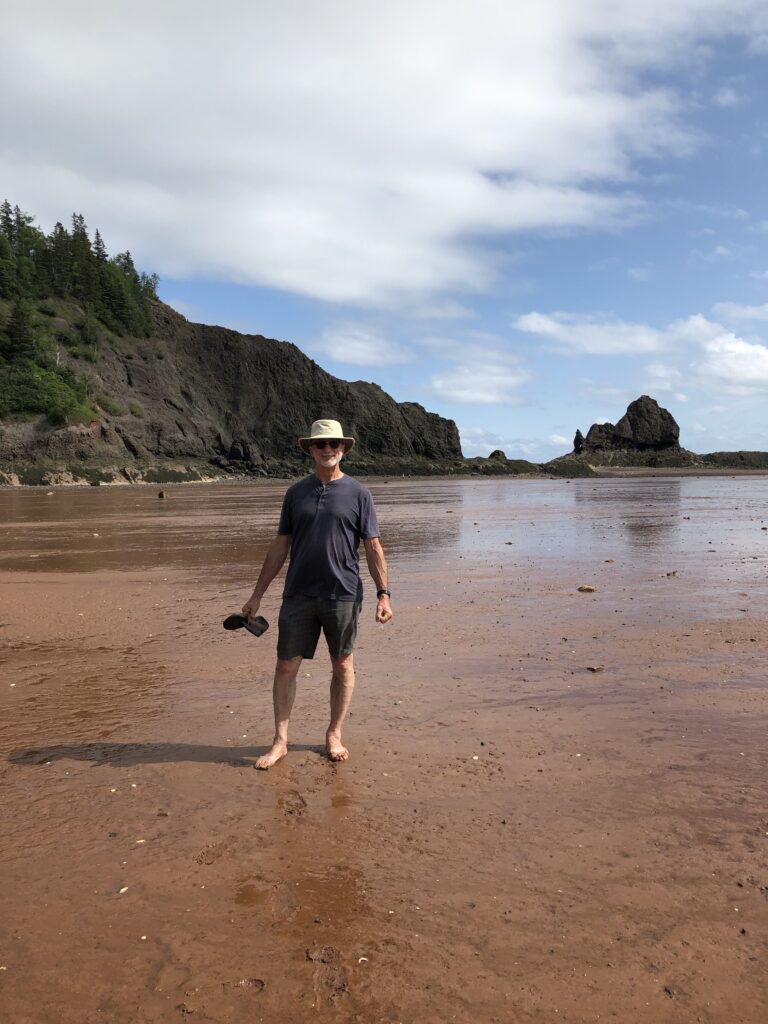 Impressive thirteen metre tides with up to three kilometres of retreating waters meant we could walk the ocean floor and  explore the shoreline safely for  several of hours. 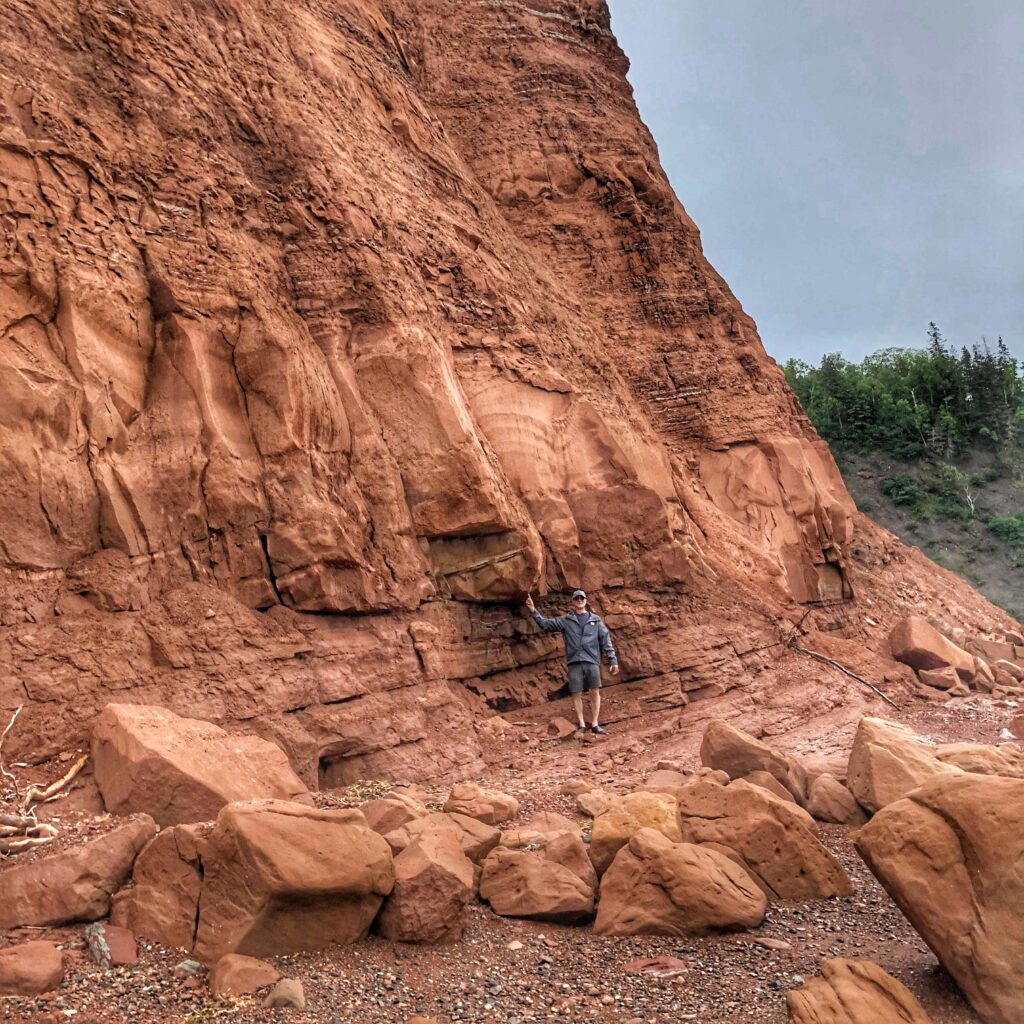 From the Days of the Dinosaurs 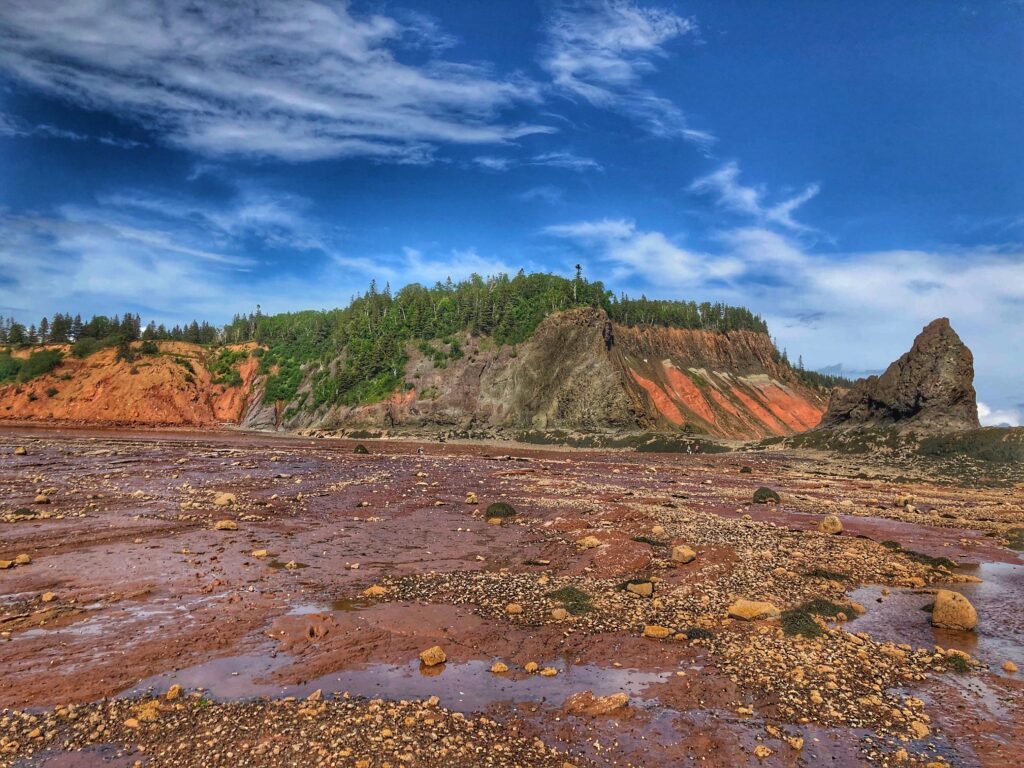 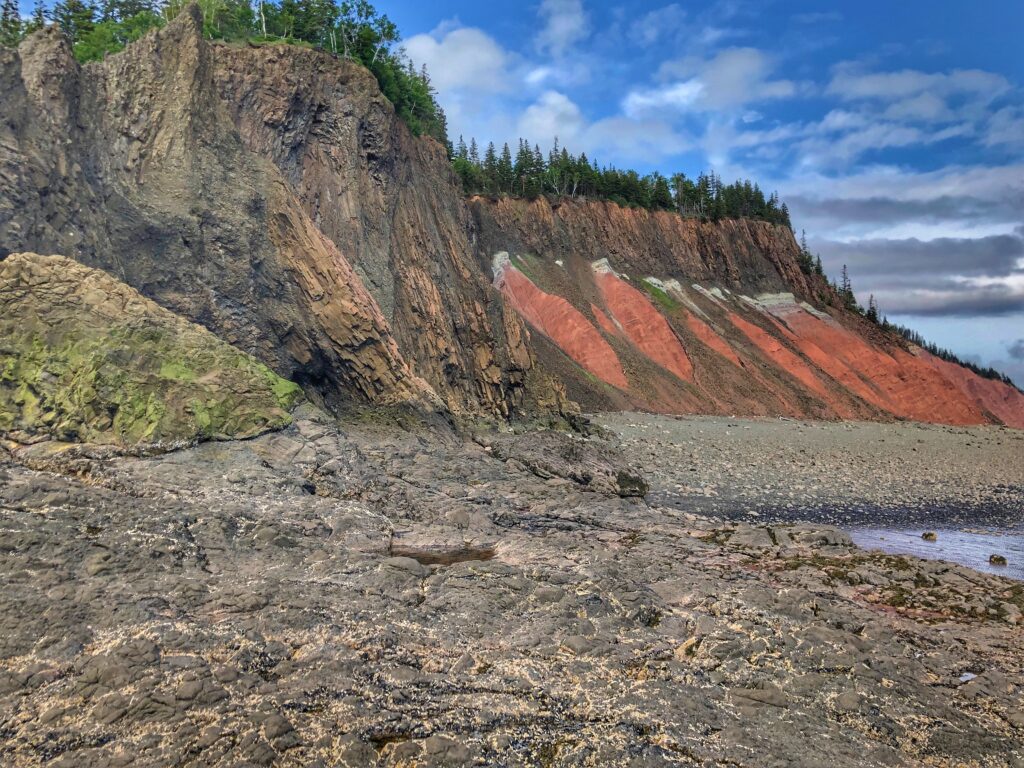 This imposing formation of eroded basalt lava flow caps and exposed orange-red sandstone  divided by a distinct fault line is only visible by land when the tide is out. And what a great vantage spot for us…on top of that cliff was our camping spot. 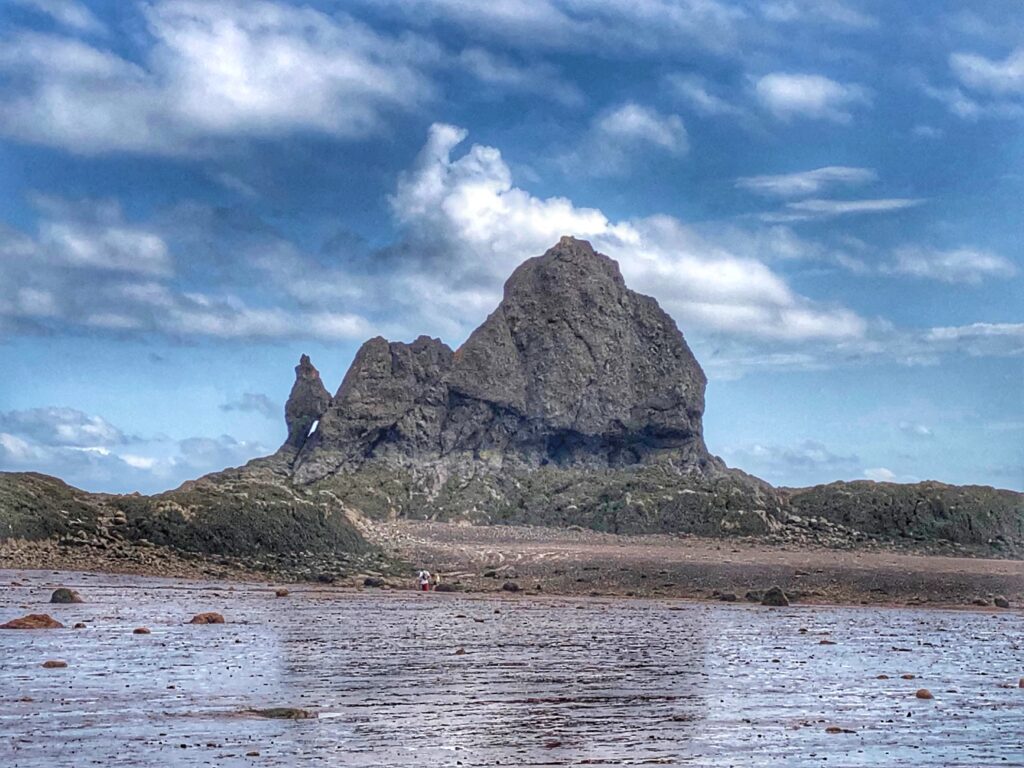 The Old Wife appears to be a mere bump in the water when tides are in but at low tide we could walk her perimeter. 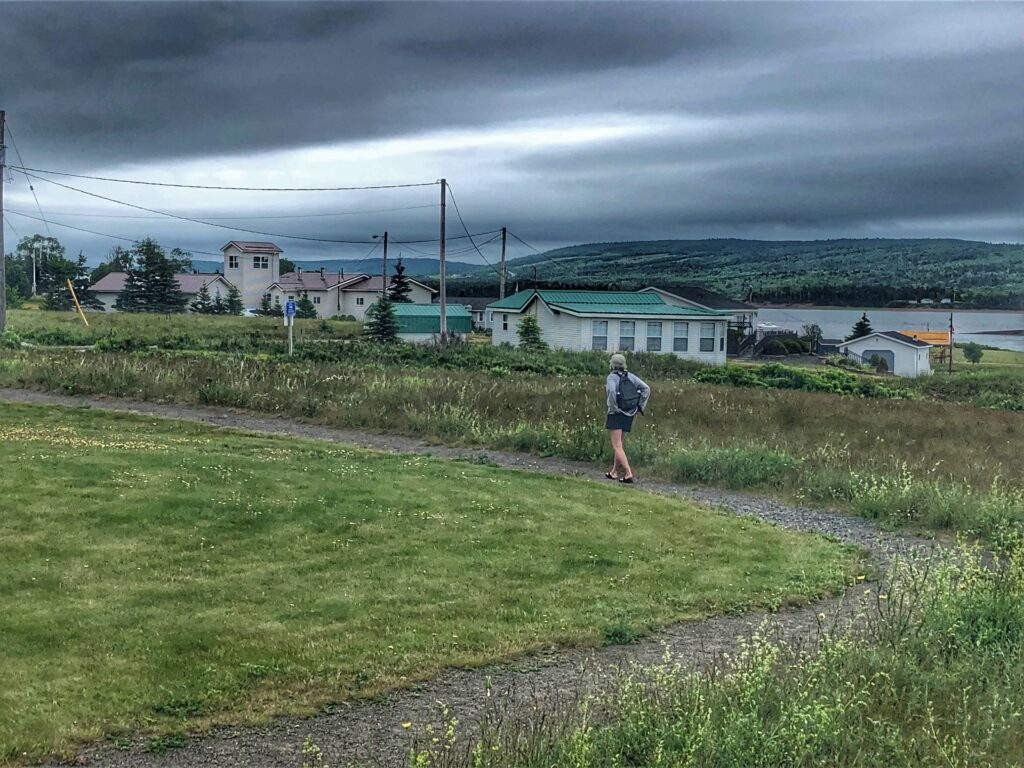 As usual we explored up and down country roads, visiting tiny villages and local attractions. 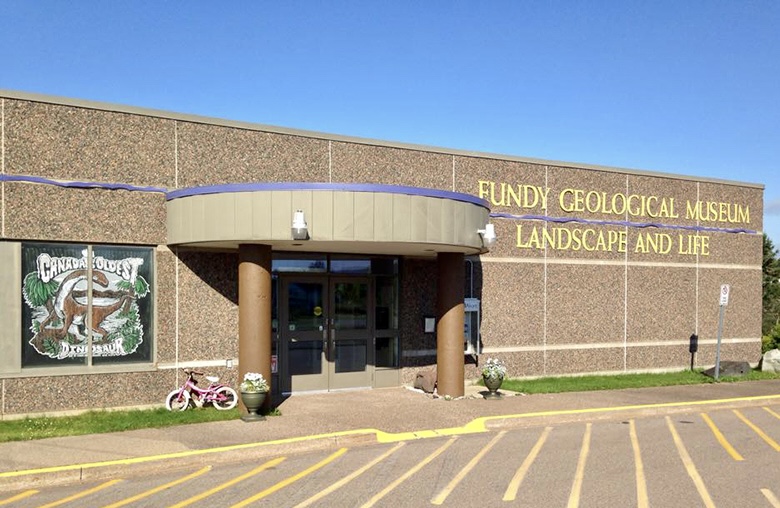 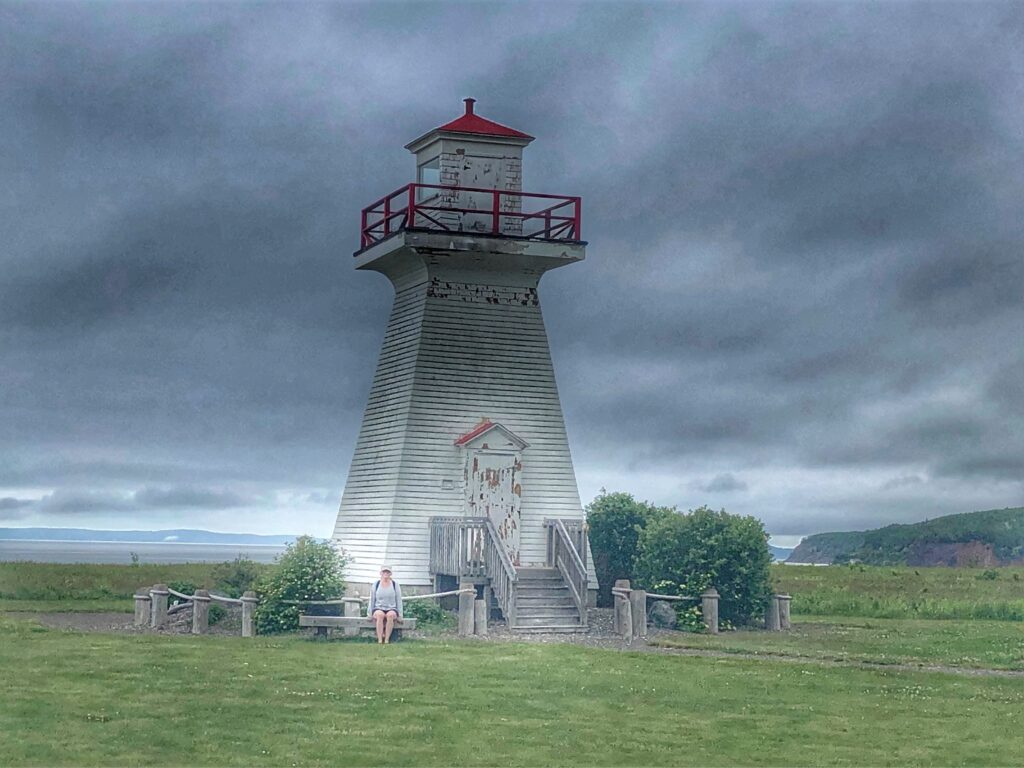 Down the road from the park we found a small general store…always fun to stop at country stores isn’t it?  You never know what treasures you will find.  Cooked freshly caught lobster and a local award-winning cheese called Dragon’s Breath (Dutchman Cheese) created a few kilometres from here with some freshly baked bread made for the perfect supper. 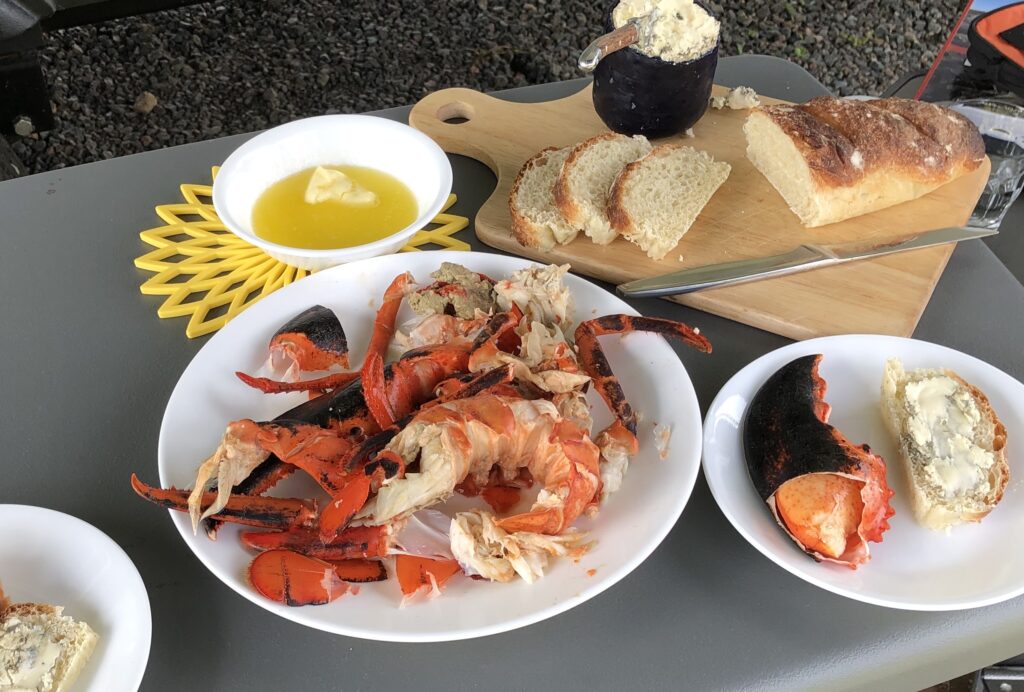 Another day of rock-hounding led us to Wosson Bluff, yet another geo site of the UNESCO designated Fundy Geoparks. 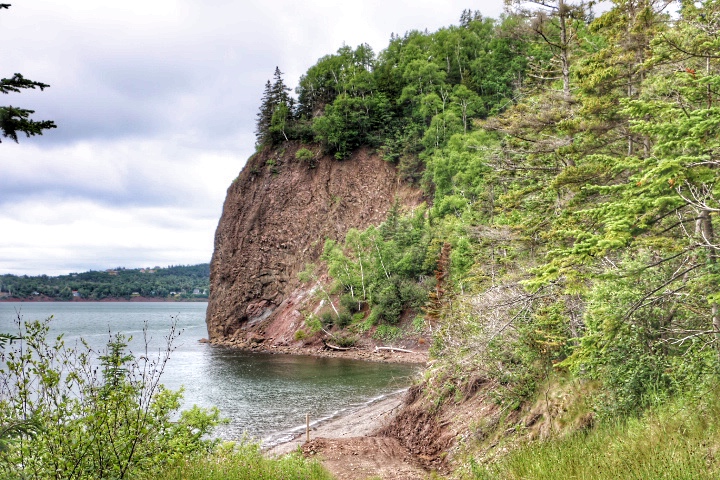 At 8:21 on our last evening we toasted the summer solstice with a tot of rum for F…mine, Irish whiskey, lit a blazing camp fire, ate far too many toasted marshmallows and watched the sun set over Cobequid Bay. 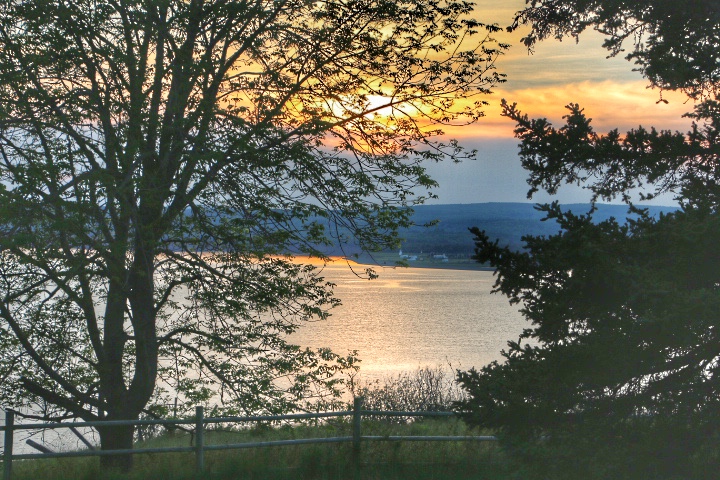 In a short while we should be able to tell you about our next trip which may even take us to a different shore of our Nova Scotia home…another new adventure for the crew of RED II.